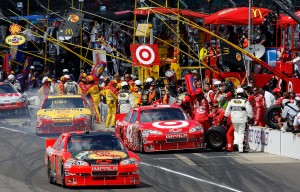 The Brickyard 400 is in the books, so it’s time for a quick follow-up on how my top five fared:

Surprise of the Day: Jamie McMurray. I rated the 1 around #11 heading into the race, but by the end of the race, he had a terrific car, and he was even able to get back around Kevin Harvick to win.