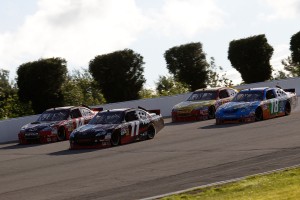 This week the NASCAR Sprint Cup series returns to Long Pond, Pa., for another run at Pocono Raceway, a 2.5-mile, triangle-shaped track. The series just ran here in June, so fantasy NASCAR players and handicappers have current data to review. In fact, I think the practice, qualifying and race data from the June race at Pocono plus the same data from last week’s soiree at Indianapolis (another giant, flat track) is enough, allowing us to ignore data from other big flat tracks, such as Fontana, Chicagoland and Kansas.

This week the Sprint Cup teams will follow the typical preliminary schedule: one practice and qualifying on Friday, two more practices on Saturday, and then the race on Sunday afternoon. According to Weather.com at press time, Friday and Saturday should feature clear, sunny skies, so we should get good practice and qualifying data to review in addition to the solid historical data.

On the other hand, Weather.com also says Pocono may receive rain showers on Sunday, which would lower predictability by changing the track and/or even causing a race stoppage. Plus, Pocono is so big, it’s more likely to produce a fuel-mileage race than intermediate and small tracks.

All in all, I tenatively rate Pocono’s predictability right at average this week. Fantasy NASCAR players should therefore look to save starts for there big-gun drivers where they can (but not go crazy!), and bettors should take a straight-forward approach to odds this week.

Handicapping Pocono
I analyzed the practice, qualifying and race data from Pocono’s June race, and then I reviewed my Race Preview Update and Race Recap notes from that race and used that info to tweak the rankings. I also crunched all the Indy data, and used those results to make minor tweaks to the rankings.

Here are the results:

Hamlin and Kyle Busch were outstanding all weekend at Pocono in June, and although they made a mediocre showing at Indy, I still think merit the mid-week top spots for this run at Pocono. Johnson was also strong at Pocono in June (although a poor starting position proved too much to overcome), but he was bad at Indy, so I’ll be watching that team carefully Friday and Saturday.

Bowyer, Harvick and Burton were very solid on both tracks and could easily win this go-round.

My Yahoo! Fantasy Picks
Group A
I will activate Kyle Busch for sure, and I’m toying with going into full start-saver mode and activating Stewart over Hamlin.

Montoya and Kurt Busch should also run well this weekend.

Group B
The numbers say I should activate Bowyer, Burton, Harvick and Newman, but I’d like to save a start or two among that bunch if possible. I therefore will work Joey Logano into the mix somehow, and Matt Kenseth, too (I have mucho Kenseth starts remaining).

I rate Kasey Kahne #5 in Group B, but I’ll save him because I have only two Kahne starts remaining.

Dale Jr. and Martin Truex Jr. are just behind those seven drivers if you’re looking to reach a little deeper.

Group C
A.J. Allmendinger and Sam Hornish Jr. are tops again in C this week, but Regan Smith is popping up on my radar, too. I’ll likely save the ‘Dinger and activate the latter two.

After Smith, I like Paul Menard and Scott Speed, in that order.