I’m sorry to report I won’t post NASCAR Cup driver rankings or DraftKings driver values this season. Doing all that posting is a big time suck, and I don’t make hardly any money doing it. It also reduces the amount of time I can spend on other projects, and one of my contract jobs has gotten much busier this winter.

Most importantly, I built up a decent bankroll on DraftKings last year (in part by taking down the NASCAR Beast), so I’m gonna take it seriously this year to see if I can actually win some consistent, significant $. I figure posting driver rankings and DraftKings driver values might actually harm that pursuit, so I will stop giving my competitors my info.

Or at least until I go broke! Who knows, if I go bust on DraftKings, I may resume posting rankings/values at some point this season. I’ll leave the blog up, and I may post non-rankings content, too. 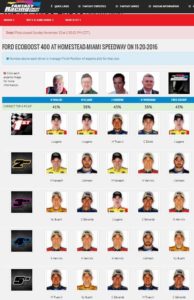 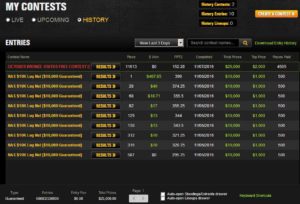 The NASCAR Sprint Cup 2015 season is rapidly approaching, and I’ve finally plugged back in. First up: evaluating how I performed in the NASCAR handicapping and fantasy game in the 2014 season. END_OF_DOCUMENT_TOKEN_TO_BE_REPLACED