“Kevin Harvick has run well for the past three weeks, and that gives him momentum going into this weekend. Put him on your roster.”

I see recommendations like this in lots of fantasy NASCAR blogs, forums, and articles written by experts. Dan Beaver, a columnist for Yahoo! Sports Fantasy Auto Racing, seems especially smitten with momentum. Pretty much every race preview he writes for Yahoo!’s fantasy players contains recommendations based on driver momentum.

So, what’s this all about? Is there some sort of mysterious force at work that prolongs lucky streaks? Do drivers on a hot streak gain some sort of mental advantage over their competitors? Does success on one type of track beget success on another?

Let’s start with a simple game that does not have any human input. Say you flip a coin and it comes up heads five times in a row. On the sixth flip, does momentum make it more likely to come up heads again? Or less likely? Neither, of course. The odds are 50-50 every single time you flip the coin no matter what happened on the previous flips. In a pure, luck-based game with zero human input, momentum does not exist. END_OF_DOCUMENT_TOKEN_TO_BE_REPLACED 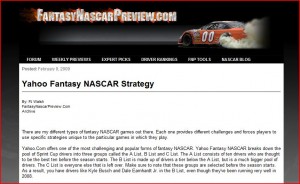 Over in the archive at FantasyNascarPreview.com, there’s a pretty good strategy article for Yahoo! Fantasy players. Titled “Yahoo! Fantasy NASCAR Strategy,” it first explains how the Yahoo! game works, then goes into some tips and strategy. I agree with most of the author’s points, and his section on Group B strategy is really good.

I do have a couple of quibbles, though. First, while I agree that we should look for situations in which we can save a big gun’s starts for his top tracks (e.g., Jimmie Johnson on 1.5 milers), I think we should temper our start-saving aggressiveness early in a season. At this point in the 2010 season, for example, the series has run on only one short-flat track (Martinsville), and it’s not quite clear yet that the big guns and duds from last year on short-flat tracks will also be big guns and duds on those tracks this year. I’d hate to aggressively save 2010 short-flat starts for a 2009 short-flat master only to discover later this year he’s no longer a short-flat master. END_OF_DOCUMENT_TOKEN_TO_BE_REPLACED 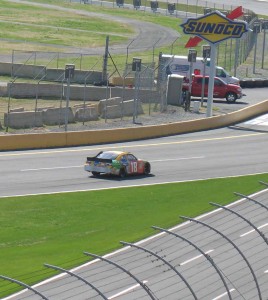