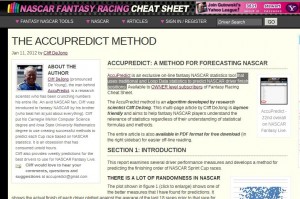 A screenshot from the article.

This off-season I finally got around to reading The AccuPredict Method, an article by Cliff DeJong over on NASCAR Fantasy Racing Cheat Sheet. Wow, I sure wish I’d read it earlier.

DeJong is a research scientist who says he’s been crunching numbers his entire life. He’s also a NASCAR fan, and he’s brought his mathematics and statistics skills to bear in the NASCAR handicapping game. The result: AccuPredict, an algorithm that uses traditional and loop data statistics to predict NASCAR driver finish positions. END_OF_DOCUMENT_TOKEN_TO_BE_REPLACED 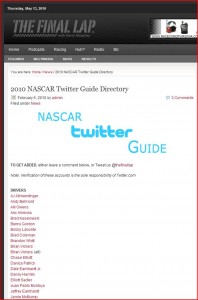 This screenshot shows a portion of the article.

I recently stumbled across an online article that features a big list of clickable links to the Twitter accounts of a lot of NASCAR drivers and teams, and the Twitter accounts of bloggers/media, sponsors, NASCAR, racetracks, and various wives/girlfriends/family. If you’re into NASCAR and Twitter, it’s a good collection to visit just for fun. For fantasy NASCAR players and handicappers, I think there’s some value in checking driver accounts if you’re on the fence when evaluating a driver for a certain race.

For example, it was unclear how many laps Denny Hamlin would run at Phoenix this spring due to his recent knee surgery, or how effective he’d be in the car. Hamlin posted a few updates on Twitter suggesting his knee was bothering him a great deal, and that info was fairly valuable to fantasy NASCAR players debating whether to start him and handicappers debating whether to bet him.

The article appears on the site The Final Lap, and is titled 2010 NASCAR Twitter Guide Directory. 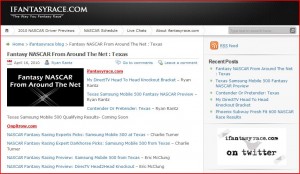 Here's a screenshot of part of today's post on IFantasyRace.com.

I just learned of a blog called IFantasyRace.com. Run by Ryan Rantz, the blog features Rantz’ own race previews and other prediction-related articles for NASCAR fantasy players, and each week he also compiles links to a bunch of race preview-type articles written by folks around the Internet (including yours truly). If you’re in the mood to do a lot of race-preview reading, check it out.

Here’s the link to the link-compilation he posted today: Fantasy NASCAR from Around the Net: Texas.