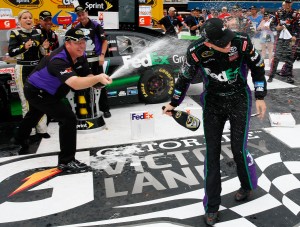 Fuel mileage did not come into play at Michigan yesterday, and the results were pretty consistent with my top four picks, with a few relatively minor surprises:

Jimmie Johnson: I rated Johnson #1 going in, but he seemed to be a tick slower that the leaders for much of the day. Surprisingly, the 48 wasn’t able to improve the car enough to get it to the front; typically that’s something that team excels at. He finished sixth.

Kurt Busch: My #2 pick had a really good car, but he was a shade slower than Denny Hamlin and Kasey Kahne. He finished third.

Denny Hamlin: Hamlin had a great car, and when he got it out into clean air, he was long gone. Score another win for the 11.

Jeff Gordon: The 24 was good, but like the 48 he seemed to be a tick off and couldn’t improve enough to fight for the win. He finished fourth.

Surprises
I figured Kasey Kahne would be good yesterday, but not that good. He had a real shot to win but just couldn’t deal with the 11 when the 11 had clean air.

I also didn’t foresee Dale Earnhardt Jr. running so well. He worked his way forward all day and finished seventh. His wasn’t a winning car, but if the 88 team can build on what they learned yesterday, watch out for them when the series returns to Michigan in August and California in October.