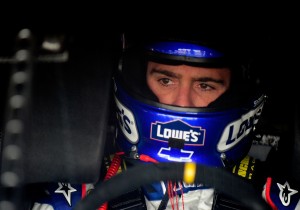 Jimmie Johnson appears to be the man to beat today. (Photo Rusty Jarrett/Getty Images for NASCAR)

The rain forecast for Friday and Saturday at Michigan International Speedway (MIS) did not materialize, allowing the NASCAR Sprint Cup teams to run all three practices and qualifying. Those of us handicapping NASCAR or playing fantasy NASCAR therefore have a substantial amount of pre-race data to examine. The post-preliminary rankings don’t match up all that well with my initial rankings, however, and I think that shuffling decreases predictability a bit.

In addition, according to the Goodyear Tire Notes posted on Jayski’s Michigan Race Info page, the teams are running different right- and left-side tires at Michigan this week, and that also decreases predictability somewhat. On the other hand, the weather forecast for Michigan at Weather.com calls for no rain today, so the track surface should remain relatively consistent today, and we don’t have to worry about rain ending the race early.

Handicapping Michigan
I noted above that the post-preliminary rankings don’t match up real well with my initial rankings, but I didn’t mention the one big, glaring exception: Jimmie Johnson. I rated Johnson #1 going into the preliminaries, and he powered through practice and qualifying to earn the post-preliminary #1 ranking as well. I therefore think Johnson is the clear favorite to win today.

I also liked Kurt Busch and Denny Hamlin early this week. They excelled in practice and qualifying and moved up in my rankings to #2 and #3, respectively.

On the other hand, several drivers did not live up to my early week expectations. I rated Clint Bowyer #2 heading into the prelims, but he appears to be way off the mark (plus, he wrecked in Happy Hour and will go to a backup car). Kyle Busch was also off, though his poor prelim scores are due in part to an engine problem he suffered during Practice 1. Juan Pablo Montoya and Mark Martin were also a little slower than expected.

And finally, Jeff Gordon looks much faster than I expected. He wasn’t in my top 12 before, but his prelim performances push him all the way up to #4.

OK, here are my updated top four for today’s race, with the best odds I could find this morning:

I don’t this there’s any value to be had betting Johnson at 3-1; I think he’s break-even at around 5-1. I think Busch is profitable at 10-1, and Hamlin and Gordon are probably break-even at 8-1.

My Yahoo! Fantasy Picks
Group A
I have Johnson and Kurt Busch, so I’m faced with a dilemma: Is Johnson’s edge over Busch large enough to justify starting him, or can I start Busch and save a Johnson start? At press time, I’m not sure. I’ll spend some time today in the forum at FantasyNASCARPreview.com and review Mark Garrow’s crew chief notes (he should post them a couple hours before the race), and hopefully gather enough info to make a comfortable decision one way or another.

Group B
I’ve got Bowyer, Harvick, Kasey Kahne and Jamie McMurray. I’ll start Harvick and bench Bowyer, and I think it’s very close between Kahne and McMurray. That will likely be another game-time decision.

I wish I had Jeff Burton available—he was stout in the prelims, particularly in race trim. Ryan Newman also looked pretty solid, and I think Joey Logano makes a pretty good dark horse. 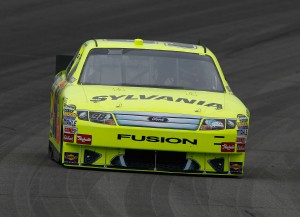 I’ve got Sam Hornish Jr. and Scott Speed, and I’m concerned I might take a beating in Group C this week because Paul Menard looked good in the prelims, and that’s by overall standards, not just Group C. Regan Smith and A.J. Allmendinger also looked better than my two picks, in that order.

Hornish has an edge over Speed, and that’s probably the way I’ll go unless something in the forum or Mark Garrow’s crew chief notes persuades me to run Speed.