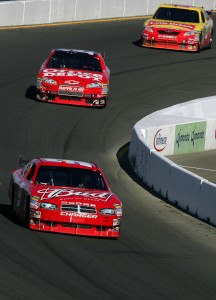 The NASCAR Sprint Cup series heads to Sonoma, Calif., this week for an interesting run at Infineon Raceway, a 1.99-mile road course featuring elevation changes and, most interestingly, right-hand turns. Of the 36 races on the 2010 schedule, 34 are run on ovals. Only twice a year does the series visit the twisty road courses at Sonoma and Watkins Glen, N.Y., and when it does, fantasy NASCAR players and those handicapping NASCAR must adjust to the fact that many of the regular Sprint Cup front runners simply stink on road courses, and some of the typically slow drivers jump way up in value on these tracks. In addition, we must also ponder the value of the ringers—i.e., the road-course specialists imported into NASCAR just for these races.

As always, we must attempt to gauge Sonoma’s predictability as well. On the down side, the historical data is relatively thin because we have only the two 2009 road-course races to evaluate (there’s little point in looking at any oval-track data this week). In addition, the race is certain to feature a fair number of wrecks, and road-course wrecks have a tendency to collect other cars, a tendency the move to double-file restarts seems to exacerbate.

On the other hand, Weather.com’s forecast at press time calls for pretty terrific weather this week, with consistent temps, mostly sunny skies, and almost no chance of rain, so we should get good practice and qualifying data. Plus, Sonoma’s pit road is pretty roomy, and reduced pit-road congestion typically reduces pit-road trauma. Fuel-mileage doesn’t seem to come into play excessively at Sonoma, and the track doesn’t seem to provoke an above-average number of equipment failures either.

All in all, I think it’s safe to rate Sonoma’s predictability below average, but not horrible. Sprint Cup bettors therefore need better odds than they do on more predictable tracks to remain profitable, and fantasy NASCAR players can be a little more aggressive than normal when looking to save driver starts (but shouldn’t go crazy ala Daytona and Talladega).

The results placed a couple fresh faces in my preliminary top 10:

My Fantasy Yahoo! Picks
Group A
I will likely line up with Montoya and Hamlin. I think Johnson has an edge on Hamlin going in, but I have only three Johnson starts and all nine Hamlin starts remaining, and Johnson’s edge on Hamlin isn’t big.

Group B
I will certainly go with Ambrose and Kahne—they both look great in the data, and as a bonus, both are not nine-start guys (though Kahne is close and getting closer).

I probably can’t avoid activating Bowyer and Newman as well even though they’re low on starts and are almost certainly nine-start guys. They just look too good.

I like Martin Truex Jr. and Jamie McMurray fifth and sixth in Group B, respectively.

Group C
Allmendinger is far and away the favorite in Group C this week, but it gets really interesting after him. I actually have Max Papis rated #2 in C, with Robby Gordon, Boris Said, and Sam Hornish Jr. next, in that order.

Scott Speed also deserves consideration because although a mistake in qualifying last year at Sonoma kept the 82 out of the race, he looked good before that. Newcomers Mattias Ekstrom and Jan Magnussen are intriguing options as well.

I can’t see not activating Allmendinger even though I have only three of his starts remaining. I have him rated #6 overall, and he’ll serve as a fallback for the big gamble I will probably take: activating Papis, too. Papis must qualify his way in, but according to the numbers, that shouldn’t be a problem.