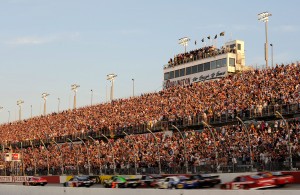 The Southern 500 gets underway Saturday night.

My top five ran just about as well as I figured they would Saturday night at Darlington, with only a few surprises:

1. Denny Hamlin: Hamlin had the co-top car, and he brought it home for the win.

2. Jeff Gordon: Gordon drove the other top car, and he likely would’ve had an exciting duel with Hamlin for the win at the finish if not for some pit-road tomfoolery with 25-ish laps to go.

4. Jeff Burton: Burton’s 31 came on strong in the second half of the race and was probably the #3 car in the field. An unfortunate pit-road penalty very late in the race sank his chances of winning, though, and he finished 8th.

5. Ryan Newman: It looked like Newman had an 8th–1oth place car for much of the night, which was just a little slower than I expected. He brought ‘er home ninth. 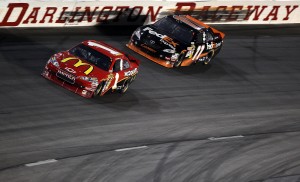 Jamie McMurray holds off Denny Hamlin for the time being during the Southern 500.

Surprises
Kyle Busch: The 18 looked good in practice but found the wall in qualifying, and Busch started the race in last position in a backup car. He powered up through the field, though, led a bunch of laps, and had a very good night.

Jamie McMurray: The 1 looked sharp in practice on qualifying runs and then grabbed the pole in qualifying, but I harbored mild concerns about his race-trim speed. He put those fears to rest with an outstanding night, leading a bunch of laps over several long runs and finishing second.

Juan Pablo Montoya: I didn’t foresee the 42 making much noise last night, but despite many metal-bending altercations with other cars, the feisty Colombian scrapped his way forward all night and finished fifth.

Picking Winners
I performed a quick review today of how my #1 picks have performed each race, and the results are encouraging. We’re 11 races into the season, but for handicapping purposes I’ll exclude Daytona and Talladega because those races are crapshoots. That leaves nine races, and my #1 picks have won three of them. Plus, in the three races I rated Jeff Gordon #1, he came home second, third, and second, and he should’ve won at least one of those. Finally, if I’d bet one unit on each of those #1 picks getting the odds I published in my race-preview updates, I’d be +6 units.

Of course, it’s nothing to get too excited about because nine NASCAR Sprint Cup races represent a very, very small sample size in a sport with a massive amount of variance. But it does suggest my evaluation methods are getting me into the right ballpark.