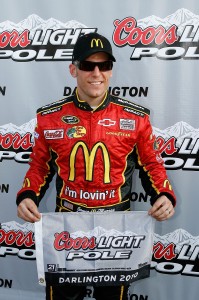 The NASCAR Sprint Cup teams completed two eventful practice sessions and qualifying in some serious spring heat yesterday afternoon at Darlington. A lot of cars bounced off the wall, my rankings underwent a significant reshuffling, and us NASCAR fantasy players and handicappers gained a lot of clarity, but before we get to all that, let’s quickly update some of the predictive factors.

The Weather
As of this morning, Weather.com says Darlington might get some afternoon thunderstorms, but the skies should definitely clear by late afternoon. There’s a chance rain will de-rubber the track, then, and the track temperature will definitely be lower when the green flag waves tonight than it was during Friday’s preliminaries. That gives the preliminaries less value as a predictive factor than they’d have if the track condition was the same tonight as it was yesterday. On the bright side, it looks like there’s no chance of a rain stoppage tonight.

Tires
The Goodyear Tire Notes on Jayski’s “Darlington Race Info” page (scroll to the bottom) indicate the teams are running a different tire package at Darlington this year than they did last  year. That decreases race predictability at bit.

The Data
In my Race Preview: Darlington, I wrote that the practice speed charts would likely reflect only the fastest cars in qualifying trim, making it difficult to determine who was fast in race trim. However, it appears that in Practice 1 yesterday, only the go-or-go-home cars performed quali-trim runs, and pretty much everybody else performed only race-trim runs. That gives the Practice 1 speed chart on Jayski’s much more value than I thought it would have. (To find it, go here and scroll down: Practice Speeds Page. The cars listed in red are the go-or-go-homers.)

Handicapping Darlington
OK, let’s get to the rankings. Hold onto  your hats because as Fox Sports announcer Larry McReynolds is fond of saying, there are a lot of comers and goers.

Goers
In my Preview, I tabbed Jimmie Johnson as the favorite. He tumbles quite a ways down because 1) he didn’t perform all that well on Friday, and 2) several other drivers performed very well on Friday.

Finally, before Friday’s action, I also liked Jeff Gordon’s, Kurt Busch’s and Ryan Newman’s chances in the race, and they did not disappoint in the preliminaries.

Here are my updated rankings with the best odds I could find online early this morning:

Notes: At press time, the lines at Bodog and BetUS were closed. If you’re into line shopping (and you should be!), visit those sites before you place a bet; they should open their lines again later this morning.

Also, when I wrote a first draft of this article last night, I took a quick look at the betting lines and saw Hamlin at 9-1 and Newman at 30-1. Those were good bets, and the illustrate the value of jumping on a bet before a sportsbook moves the line to more accurately reflect the new data acquired from practice and qualifying.

My Yahoo! Fantasy Picks
Group A
Gordon is an easy start for me over Biffle—he just looks a lot better. If you’ve got Hamlin available, he’s a lock.

Group B
Newman is a lock, and Kenseth a definite “no.” For me, that leaves Jamie McMurray and Joey Logano to choose from, and although McMurray “won” Practice 2 and grabbed the pole, it’s a fairly close decision because Logano was significantly better in race trim in Practice 1. I will probably go with McMurray.

As discussed above, Jeff Burton looks terrific, and Kasey Kahne should run well, too.

Group C
A.J. Allmendinger looked really good in both race and qualification trim. He’s a legitimate top 10 threat this week, and he’s head-and-shoulders above everyone else in Group C.

Sam Hornish Jr. represented C pretty well today, but as I mentioned in my Preview, I think starting him at Darlington would make me queasy—you just know he’s gonna whack the wall.

Lessons Learned
In my Preview, I wrote that Darlington’s track is very abrasive and chews up tires. I was reminded today during the the Practice 1 telecast that the track was repaved a couple of years ago, and the surface is now much more tire friendly.