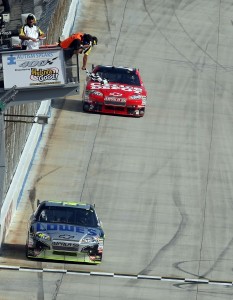 The Sprint Cup series moves to Dover, Del., this week for a run on Dover International Speedway, a 1 mile, steep-banked, concrete track known as The Monster Mile. We should enjoy decent predictability this weekend for several reasons. First, Dover hosted two Sprint Cup races last year, and the teams followed the typical pre-race schedule during both: practice and then qualifying on Friday, and then two more practices on Saturday. This schedule gives us solid total-speed data on the Practice 1 and qualifying speed charts, and excellent race-trim data on the Practice 2 and Happy Hour speed charts.

In addition to the 2009 Dover data, we can fine-tune our driver evaluations with the historical data from recent races at Bristol and Darlington. These tracks are far from Dover copies, of course, but they do share somewhat similar banking and length, so drivers and setups tend to perform somewhat similarly across them.

Finally, at press time Weather.com says scattered thunderstorms might visit Dover on Friday, but that Saturday and Sunday should feature partly cloudy skies with consistent mid-70s temperatures. At the least, then, we should get solid race-trim data on Saturday, and the chances of a rain stoppage on Sunday seem very low.

Handicapping Dover
I’ve evaluated all the aforementioned historical data for Dover, and I think Jimmie Johnson is the favorite. The fact he won both Dover races last year certainly doesn’t hurt, but I’m not quite ready to anoint him the “clear favorite” because Kurt Busch rates not far behind the champ on The Monster Mile:

Where’s RCR?
I’m a little puzzled why none of the Richard Childress Racing guys—i.e., Jeff Burton, Kevin Harvick, and Clint Bowyer—showed well in my Darlington preview or this Dover preview. With Harvick atop the points standings and Burton and Bowyer running pretty well, too, it seems strange they haven’t cracked my initial top 10 these past two weeks.

There are probably three reasons for this. First, the RCR cars ran poorly last season, and even though all three teams have dramatically improved this year, those run-bads continue to skew the historical data. Also, the RCR cars seem to race a little better than their practice and qualifying efforts suggest they will (especially Burton). And finally, they just aren’t as good on these shortish-banked tracks as they are elsewhere.

I suspect the RCR cars will perform better than the historical data suggests in the preliminaries Friday and Saturday, possibly enough to push their way into my top 10, or higher. Last week Jeff Burton moved into my #5 spot following practice and qualifying at Darlington and ended up with probably the #3 car late in the race,  so stay tuned—something similar could happen again.

My Yahoo! Fantasy Picks
Group A
I will line up with Johnson and Kurt Busch—both appear to be the class of Group A so far. I think Montoya and Biffle make interesting dark horses, though.

Group B
A nice mix of top- and mid-tier drivers lead the way in my Group B ratings, so I don’t have to stretch to find a start-saver driver this week. I’ll likely line up with Ryan Newman, Matt Kenseth, and Kasey Kahne, and then either David Reutimann or Jamie McMurray.

I’m now officially looking to save Newman starts when I can because he’s made it clear he’s a top-tier guy in Group B this year. However, I can’t sit him this week (at least not yet) because he’s easily the top-rated B driver at Dover.

Group C
Not only is A.J. Allmendinger my top-rated driver in Group C once again this week, he’s again head-and-shoulders above the other guys, so I’m forced to make him available. He appears to offer much more value than everybody else in C, and I don’t see how I can pass up on that value by saving him for later races. It would be hard for him to offer even more value relative to the other drivers at later races.

After Allmendinger, I like Sam Hornish Jr., Regan Smith and Paul Menard in that order, but they’re grouped fairly tightly. I’m leaning toward activating Smith because he was pretty strong at Darlington last week, and I don’t mind saving a Hornish start (particularly with him tearing up a car a week lately).