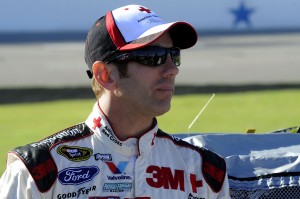 The NASCAR Sprint Cup teams got in all three practice sessions and qualifying at Texas Friday and Saturday under clear, cool skies. Interestingly, several of the typically blue-chip drivers didn’t look all that good in these prelims, including poor qualifying efforts that placed top-guns such as Jimmie Johnson, Denny Hamlin and Kevin Harvick way back in the field.

To handicap the race, I crunched the numbers from those prelim sessions to produce initial rankings, and then I merged those rankings with the historical rankings I produced earlier this week (thus weighting the results heavily toward the initial rankings). Finally, I tweaked the results per the 10-lap averages in practices 2 and 3.

The Roush Racing cars looked good in the prelims, with Biffle running best of all. The Bif was pretty good on short runs and over 10 laps, he starts on the front row and he was in my top six in the historical rankings. I look for the 16 car to have a solid day today.

Kyle Busch will start the race way back in the field, but expect to see the 18 quickly carve its way up through the field once the green flag drops. Busch was very good on short runs and was tops in the Practice 2 10-lap averages as well. Plus, he’s #2 in the historical rankings.

Kurt Busch also appears to have a strong car, but I’m leery of placing any money on the 2 today because in a TV interview during practice Saturday, Busch suggested the 2 teams was working on setups with an eye for the 2011 season. In other words, they were experimenting.

Johnson slipped from the #1 spot in my historical rankings down to #6, but I certainly wouldn’t count the 48 out. Johnson reeled off the #3 10-lap average in Practice 3 Saturday.

What about Denny Hamlin and Kevin Harvick, Johnson’s closest competitors in the Chase? Neither looked too good on the speed charts, and both start way back in the field, so going just by the numbers, I can’t justify placing them in the top six. Of course, I wouldn’t be surprised to see them running up front as the race winds down. Hamlin’s teammate, Kyle Busch, looks good, and there should be some crossover there. And with Harvick, well, I’ve been wrong on him many times this season. He almost never looks good in the prelims but eases his way forward anyway. Plus, the 29 team seemed to finally find a decent setup in Practice 3.

One last thing: The teams practiced on a relatively cold track yesterday, much colder than it will be at race time today, and that could really shake things up. Cars that looked slow on the cold track could really come to life on the warm track, and vice-versa. I expect to see lots of comers and goers once the green flag drops!

My Yahoo! Fantasy Picks
Group A
I’ll start Kyle Busch over Jeff Gordon. Biffle, Kurt Busch and Edwards offer excellent value and allow you to save a Johnson start if necessary.

Group B
I’ll start Martin Truex Jr. and Ryan Newman over Dale Jr. and Jeff Burton. Junior looked off in the prelims, and it was hard to tell exactly what Burton has for the race.