Back in February, Richard Petty was famously quoted in USA Today as saying Danica Patrick could win in Sprint Cup racing “(Only) if everybody else stayed home.” I immediately wondered, “Is he right? Is there any chance Danica can win a Sprint Cup race?”

For starters, from a purely literal perspective, if she starts a race, she does have a non-zero chance of winning. For instance, all 42 of her competitors could break down simultaneously, as wildly improbable as that would be. So, does she literally have zero chance of winning? No.

But for practical purposes, can she win a Sprint Cup race this year? Below, I dig into the numbers to find out.

First, the Plate Races
Let’s get the restrictor plate races out of the way first. The pack racing produced by restrictor plates greatly increases the variance at these races, which greatly improves the lesser cars’ and drivers’ odds. Plus, Danica drives good equipment at Stewart-Haas Racing—good enough to win the pole for the 2013 Daytona 500. She seems to do OK in the draft, and other drivers seem willing to work with her in the draft. Last year going into the four plate races, I ranked her 27th, 16th, 17th, and 6th.

Add all that up, and yeah, she could certainly win a plate race. I guesstimate her plate race odds at 27-1. That’s a big long shot, but big long shots have won plates races before; Trevor Bayne and David Ragan come to mind in recent times. 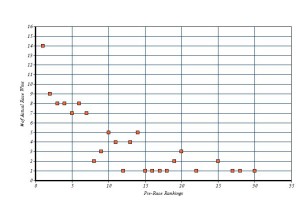 The Other 32 Races
Over the 2011, 2012 and 2013 Sprint Cup seasons, I handicapped 99 races, including plate races. The graph at the right shows where the actual winners of those races came from in my rankings. For example, 14 race winners had been ranked first in my pre-race rankings, nine winners were ranked second, eight were ranked third and so on.

So how has Danica fared in my pre-race rankings? Across the 32 non-plate races last year, Danica’s ranking averaged 30.8, with a best of 27th. Ouch.

Danica is no Stewart or Harvick. Conclusion? Last year she had virtually no chance of winning a non-plate race. I guesstimate her average odds were roughly 400-1.

What About This Year?
Does Danica have a realistic chance of winning a race this season? At a plate race, certainly. I had her ranked 22nd at Daytona—that’s doable.

What about non-plate races? Only if she undergoes significant improvement, and unfortunately, that seems unlikely. First, remember that it’s not enough for Danica to simply get better as a driver. To improve her race results, she must improve relative to other drivers. A tall order when you think about who she’s up against. 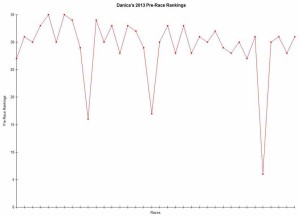 Second, while I did see her improve in the numbers last season, it wasn’t a lot. Check out the graph at the right, which shows her pre-race rankings for each race last season, from first to last. Yes, it’s trending down, which indicates improvement. But it’s a pretty slight trend. (Note: The big dips—i.e., relatively high rankings—occurred at plate races.)

Third, check out the graph of her actual race finishes last season, from first to last. I think I can see an improvement trend in there as well, but again, it’s pretty slight. 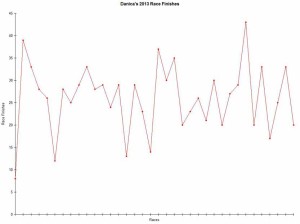 Finally, some recent history. During Danica’s 2012 season in the Nationwide series, I recall Larry McReynolds saying during one broadcast that Danica was not improving. I don’t have any Nationwide numbers, and I can’t find a link to coverage of McReynolds’ comments, so take it with a grain of salt. I think it’s worth noting, however.

Conclusion
Danica has a long-shot’s chance at winning a plate race this year, But when it comes to non-plate races, Petty is right: Barring miraculous and unforeseen improvement (or outright cheating), Danica has no realistic chance of winning a non-plate race in Sprint Cup this year. 300-1 odds seem generous.