We’re now deep into the NASCAR off-season, and what better time to delve into the nuts and bolts of NASCAR handicapping? I plan on presenting how I handicap each NASCAR race soon, from beginning to end, but I think I should first explain how (and why) I evaluate practice and qualifying each week to lay some ground work.

Is It Worth It?
First the why: Do the weekly practices and qualifying hold predictive value for that week’s race? Absolutely, and not just in theory. My research following the end of the 2012 season showed that tweaking my mid-week rankings for a race with the subsequent practice and qualifying data for that race significantly improved the rankings’ standard deviation (SD) from the actual race results.

My Method
Us handicappers are fortunate because each race week NASCAR records the elapsed time for every lap every car turns, from the time they unload from the hauler to the time they load back up (I think?). And, NASCAR then shares this data with us in the form of speed charts broken out into practice and qualifying.

This is pretty awesome, first because it’s comprehensive; that is, we know how fast every driver has run every lap. There’s no guesswork, and it’s all apples to apples. Plus, the speed charts give us nice, hard numbers we can flow into spreadsheets to manipulate to our hearts’ desire. 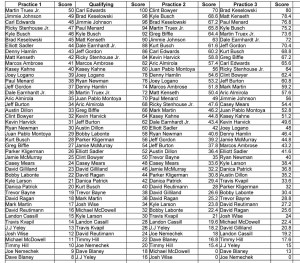 Spreadsheet 1 shows the drivers listed from fastest to slowest in each practice and qualifying, with a score assigned to each.

Which is exactly what I do each week. Each speed chart lists the drivers from fastest to slowest in each event. I copy the driver names from each chart and paste them into a spreadsheet, preserving the order. Then I assign each driver a score, with the fastest getting the highest score and the scores descending from there. I do that for each practice and qualifying (see Spreadsheet 1).

About the scores: As you can see in Spreadsheet 1, the scores vary from event to event. That’s because I weight them differently. I place the most weight on qualifying, because that’s the one event in which we know each team is attempting to run one lap as fast as possible. I weight Practice 3 second highest because it’s the last practice, so 1) the cars are usually as fast as they’re gonna get, and 2) it reflects long-run speed because it comes after qualifying. Practice 2 gets the third highest weight, and Practice 1 gets the least weight because it’s the very first event. (Note: These weights apply only to the Practice-Qualifying-Practice-Practice prelim schedule; I typically change things up a little for other schedules, if rain washes out an event, etc.) 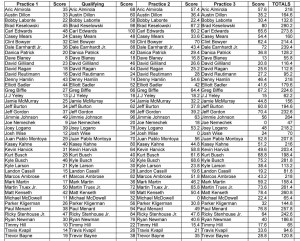 Spreadsheet 2 shows the drivers sorted alphabetically, and with their scores added up.

Next I sort each event alphabetically, making sure each driver’s score goes with them. This allows me to line up each driver across all the events, and then add their total scores (see Spreadsheet 2).

Finally, I sort the spreadsheet by the total scores, from highest to lowest. Now I have quantified how each driver performed across all the prelim events, and I have some good data I can use to adjust my final race rankings (see Spreadsheet 3).

Eyes & Ears
The speed chart data is nice, but it’s by no means the only data available during a race week. If you watch practice or qualifying telecasts, follow the speed charts in real time, read driver or crew chief tweets, etc., you can obtain a great deal more information beyond the hard numbers. And, if you do it very carefully, you can make significant improvements to your overall rankings by applying such non-hard data. 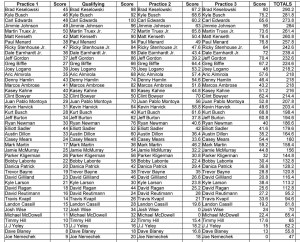 Spreadsheet 3 shows the drivers sorted by their total scores.

For example, let’s say Jeff Gordon qualifies 25th despite looking very fast in Practice 1. You watched qualifying on TV, and you saw Gordon get loose in Turn 2. In fact, he almost crashed, and it killed his lap. You can then go to your spreadsheet and manually move Gordon up from 25th to a spot you feel approximates how he would’ve qualified had he not screwed up.

Or maybe you watch the Practice 3 telecast, and a pit road reporter interviews Kyle Busch’s crew chief after. On the speed charts, Busch ran much slower in Practice 3 than Practice 2, and his crew chief explains, “Yeah, we were experimenting with a setup in final practice, and it was way off. We’ll go back to the setup we had earlier, which Kyle really liked.” Sounds like a solid reason to adjust Busch up in your Practice 3 listings so that his actual speed chart number doesn’t drag him down unnecessarily.

And then there are the 10 lap averages. NASCAR also collects this data during each practice, but unfortunately it’s very rare that every driver will actually run 10 consecutive laps. I therefore can’t include 10 Lap Average columns in my spreadsheet—I’d have to guesstimate placements for the missing drivers, and that would add just too much soft data to the spreadsheet.

However, you can look at that data and use it to tweak your rankings if something stands out. Did Jamie McMurray top the 10 lap averages in Practice 2 and Practice 3? By all means, consider bumping him higher as you see fit.

Final Thoughts
My speed chart/hard data/spreadsheet approach to quantifying NASCAR prelims should really be just the starting point. Unfortunately, I usually don’t have time to watch all the telecasts, peruse social media for insights, etc., so I often miss out on good soft data each week, and that hurts my handicapping efforts.

In contrast, NASCAR handicapper Kyle Wiseman does seem to spend a great deal of time pulling together soft data, and he is very good. He topped all the other experts again this year over on Fantasy Racing Cheat Sheet. He also writes up prelims reports and participates in the forums over on Fantasy NASCAR Preview. I recommend checking him out.

Let me know if you have any questions, critiques, etc., in the Comments field below. And stay tuned for my upcoming post on how I put everything together to compile driver rankings each week.

2 thoughts on “My Prelims Scoring System”