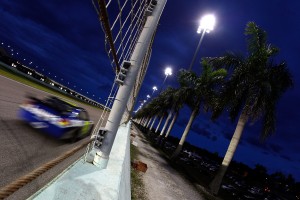 I did not look at the 2009 race at Homestead because that race was an entire year ago, and I just can’t see its data having much value. I also excluded the spring races at Texas, Charlotte and Atlanta because that older data also has diminished value, and I think that with all the other data on hand, I can be choosy (i.e., my data sample size is OK as is).

I came up with this top eight:

Johnson has looked relatively vulnerable at the 1.5 milers as of late, but the numbers say you still can’t bet against him. I’m really liking Biffle and Edwards and look for them to run well in the prelims Friday and Saturday.

I’m surprised to see Hamlin show up so low because he’s been finishing races so well recently. He could easily shine in the prelims and jump up my rankings.

My Yahoo! Fantasy Picks
Group A
Run Johnson if you got him. I don’t, so I will pair either Biffle or Edwards with Kyle Busch. I will activate Kyle to hedge my bets in case the Roush cars of Biffle and Edwards both stumble in the prelims.

Group B
I will activate Reutimann and Martin Truex Jr. for sure. I like Bowyer ahead of Truex, but I’m out of Bowyer starts.

After that it gets interesting. I like Jamie McMurray and Joey Logano about as much as I like Matt Kenseth and Kevin Harvick this week, and I’m sorely tempted to bench the big guns and roll with JMac and Logano instead. Why? Thanks to my team’s collapse at the end of the season, I’m way behind in points in my group and have fallen down to 87th percentile overall in Yahoo!. I figure everybody and their brother will have Harvick and Kenseth activated, so by benching them I give myself a chance to make up ground if they find some magic this weekend.

Group C
I like Paul Menard tops in C this week, so I’m psyched to have one Menard start remaining. I rate A.J. Allmendinger and Sam Hornish Jr. next, but I’ve burned them up. I’ll activate Regan Smith alongside Menard, though Scott Speed is close.