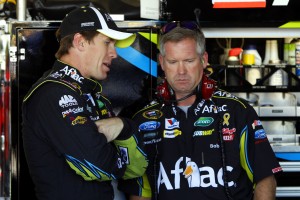 The NASCAR Sprint Cup teams got in all three practice sessions and qualifying at Phoenix Friday and Saturday. To handicap the race, I crunched the numbers from those prelim sessions to produce initial rankings, and then I merged those rankings with the historical rankings I produced earlier this week (weighting the results heavily toward the initial rankings). Finally, I tweaked the results per the 10-lap averages in practices 2 and 3.

I came up with this top six:

Edwards is the clear favorite to win. He looked fast on short and long runs, he starts on the pole and his historical numbers on the short-flat tracks this year are pretty good, too.

Jeff Gordon also looked good in the prelims, but 1) he looked just a tick slower than Edwards, and 2) he starts the race pretty far back in the field (22nd). The 24 car could win, but he’ll have to successfully navigate his way forward, and then he’ll have to deal with Edwards.

Johnson has fantastic short-flat numbers this year, but he looked a little off in the prelims (relatively speaking). Plus, he too has a crummy starting position (21st).

For a change, Harvick’s prelim numbers looked decent, so watch out for the 29. He starts waayy back in 29th, but he’s started poorly in almost every race this year, and nearly every race ends with the 29 car up front anyway. 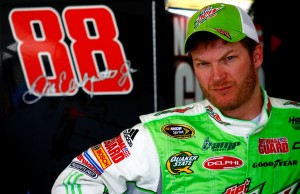 Finally, I’m liking Logano and Dale Jr. as sleeper picks. Logano looked very fast and he’s got a decent starting spot (10th). Dale Jr. looked strong as well, and I’m not super concerned about his poor starting position (31st). Unfortunately for 88 fans, Junior has gained plenty of experience starting way back in the field this year, but on the bright side, he’s learned to move up through the field pretty well when he has a good car.

My Yahoo! Fantasy Picks
Group A
I’ve got Gordon and Kyle Busch available, and I’ll start Gordo. I certainly wish I had the 99 available.

Group B
I’ve got good options with Logano, Harvick and Dale Jr. I’ll definitely run Harvick, and probably Logano, too.

After the 43, I like Sam Hornish Jr., Regan Smith, Paul Menard and Scott Speed, in that order. I’ll run Hornish over Speed.