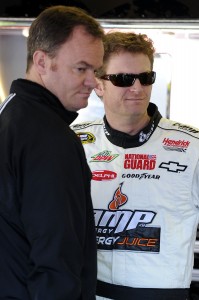 Practice and qualifying are in the books at Talladega, but unfortunately we still don’t have a great idea of how Sunday’s race will unfold because the prelim data’s value is extremely limited. If you look at the practice speed charts, the cars at the top are the cars that just happened to run fast while practicing running in the draft. Those numbers come from a relatively small number of laps and don’t provide much of a window into what will transpire during the 500 mile nail-biter. Qualifying helps give an idea which cars have the most total speed, but that’s probably the last time the cars will run solo this weekend. Plus, a number of drivers didn’t even get on the track in Happy Hour, and that throws the numbers way off.

That’s not to say the data is totally worthless, however. And if you add in the 10-lap averages, impressions gleaned from watching the prelim telecasts (including driver and crew-chief interviews), and the historical data, at least a fuzzy handicapping picture emerges.

That’s probably the longest list I’ve published all year. I did it because Talladega is such a crapshoot, the winner could easily come from any of these fellows.

As you can see, Dale Jr. has jumped to the top of my chart. I liked him in the historical data, he looked pretty good in practice and he qualified sixth despite going out very late after the wind had begun blowing a bit. Also, I liked a lot what I heard from Junior in an interview prior to qualifying Saturday. He liked his car in race trim quite a bit, noting that he felt more on offense than defense in the pack during practice—a good sign.

My Yahoo! Fantasy Picks
Group A
I’ll run Kyle Busch over Greg Biffle. Kyle looked solid in the prelims, and the Bif didn’t.

I think Mark Martin makes a fine sleeper in A.

Group B
I’ll run Dale Jr. and Matt Kenseth over Kevin Harvick and Joey Logano. Harvick will probably once again burn me with a fantastic race run despite his usual horrid runs in the prelims, but that’s OK this week. I think I’m getting great value with the 88 and 17.

If you need to save starts, this is a good week to run Reuty or Logano.

Group C
I can’t say the prelims did much to clear the very foggy air in Group C this week. I’ll run Regan Smith over Michael Waltrip. I think Scott Speed and Robby Gordon look decent, too (for C).