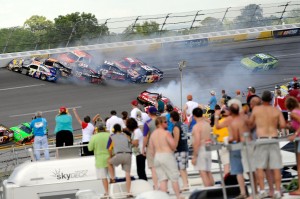 The series returns this week to the king-size track in Talladega, Ala., the track that provides the most unpredictability on the circuit (Daytona is a close second). NASCAR forces the teams to run a restrictor plate on the carburetor on this 2.66 mile, high-banked track because without it, drivers would reach speeds well over 200 mph, posing an unacceptable risk to everyone near the track.

The problem with capping horsepower, of course, is that it tends to bunch the cars up in packs, and packs increase unpredictability in two ways. First, they produce an intense form of drafting tactics in which the cars form lines two- and three-wide. To get up front, drivers must draft in line and shuffle between the lines to move forward. This means drivers with average skills and equipment have a greater chance running well than they do at non plate tracks.

Second, the packs tend to produce big, demolition-derby style crashes. If one driver in a pack bobbles, surrounding cars have little chance of avoiding him, and carnage results.

All that said, you can still get a feel for who will run well Sunday—you just have to alter your evaluation process a little.

Handicapping Talladega II
I’ve looked at the qualifying and race-result data from 2010 races at Talladega and Daytona to compile initial rankings. Then I tweaked them after I reviewed the drivers’ laps-led and times-led statistics for those races, my race-recap notes from those races and the opinions of other online experts.

I came up with the following:

Bowyer hasn’t been spectacular on the plate tracks, but he’s been consistently solid. He seems to have figured out how to avoid trouble throughout the race, and then get up near the front at the end.

Biffle, Burton and Kyle Busch have had good cars at the plate tracks this year, and they too seem to know how to avoid trouble and finish up front.

Finally, will Dale Jr. reclaim his Pied Piper role at Talladega? He’s been solid on the plates this year, and perhaps leading the race for awhile last week at Martinsville gave him a taste of his old mojo.

My Yahoo! Fantasy Picks
This late in the season, I’m generally not looking to save driver starts any longer, except for this weekend at super-unpredictable Talladega.

Group A
I’ll happily activate Biffle and Kyle Busch. I rate them highest in A and don’t need to save their starts.

I rate Johnson next, but if I had any 48 starts remaining, there’s no way I’d burn one this week.

I also like Reutimann, David Ragan and Jamie McMurray, in that order. I’m tempted to run JMac—he’s solid on the plate tracks.

Group C
This group is tough to handicap this week, with many options. I rate Robby Gordon highest, but it appears he’s not running this race. I like A.J. Allmendinger next, but there’s no way I’d run him at ‘Dega unless I had a bunch of starts remaining.

Shockingly, I like Michael Waltrip, Paul Menard and Scott Speed next, grouped tightly together. Can I bring myself to gamble on Waltrip finding some of his old magic? There’s no way I’ll burn one of my two remaining Menard starts at ‘Dega. Can I stomach running Speed?

Then there’s Aric Almirola, who will pilot Richard Petty Motorsports’ (RPM) 9 car this week. With Kahne in the seat, the 9 car was very good on the plate tracks this year. However, given all the turmoil at RPM recently, will that car be up to snuff? And will the Sprint Cup regulars treat Almirola like a rookie and diss him in the draft?

What about Bobby Labonte running in the James Finch car this week? The Finch car should have decent equipment (including lots of Hendrick Motorsports pieces), and Labonte is a cagey old veteran who knows how to get around and survive the superspeedways.

Finally, don’t forget about Regan Smith. His superspeedway numbers are down recently, but it’s important to remember that most (if not all) of his recent failures were due to events out of his control (i.e., equipment failures and crashes). Surely he’s still a solid plate racer?

At the moment, I’m leaning toward Waltrip and Smith, but I’m not ready to lock ’em down yet.