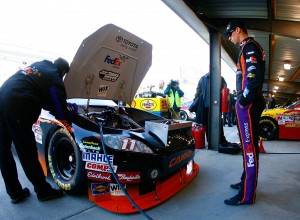 The NASCAR Sprint Cup teams got in all three practice sessions and qualifying at Martinsville Friday and Saturday. To handicap the race, I crunched the numbers from those prelim sessions to produce initial rankings, and then I merged those rankings with the historical rankings I produced earlier this week (thus weighting the results heavily toward the initial rankings). Finally, I tweaked the results by considering starting positions, 10-lap averages during practice and the opinions of another online expert.

The results feature the usual suspects, plus one significant exception:

I think Hamlin is the clear favorite today. He looks great in the historical data, he was fast on long and short runs in practice this week, he starts from the pole and he’s got the best pit stall. Hamlin will likely put pressure on Chase leader Johnson today.

Johnson looks very good on the track as well, but he’s hampered by his crummy starting position (19th). He should move forward throughout the race, provided his machine doesn’t get roughed up while he’s back in the pack.

Harvick, the #3 man in the Chase, also has a good looking car, but he rolls off much further back than Johnson (36th). Like Johnson, Harvick should move forward, if he avoids trouble.

The significant exception? Ambrose. I hesitate ranking the 47 car so high, but I can’t ignore his practice and qualifying performances, or his historical numbers. I look for Ambrose to run well today. 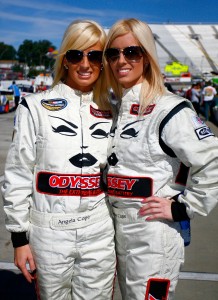 In other news, twin sisters Angela and Amber Cope pose before running the truck race at Martinsville yesterday.

Group A
I will joyfully start Hamlin today, though having Gordon available, too, makes it interesting.

Johnson and Biffle make solid picks, and I like Juan Pablo Montoya as a dark horse in Group A.

Group B
I’ll use up my last Bowyer start today, and I’ll run Burton, too. Newman will sit on the bench alongside Joey Logano (who surprisingly didn’t look too good in the prelims).