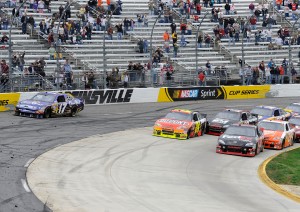 Denny Hamlin reclaimed the lead late in the spring Martinsville race after Jeff Gordon and Matt Kenseth got to beatin' and bangin'. (Photo John Harrelson/Getty Images for NASCAR)

The Sprint Cup series returns this week to Martinsville, Va., for another run on the .5 mile flat track known as “the paperclip.” Martinsville Speedway is like no other track on the circuit, but for handicapping purposes you can group it loosely with other short, flat tracks to increase the sample-size of practice, qualifying and race data you analyze.

Hamlin had the best car at Martinsville in March, and he’s been strong on the other short-flats this year, too. I also expect Gordon to run well, and although Johnson looks surprisingly down a bit in the numbers so far this week, beware of counting that team out.

My sleeper pick in Group A this week: Mark Martin.

Group B
I’ll go with Newman, Burton and Bowyer, and probably Logano, too. Though McMurray is pulling at me.

I actually like Marcos Ambrose sixth in B, followed closely by Martin Truex Jr. and Dale Jr.

Group C
I rate Slammin’ Sam Hornish Jr. tops in Group C this week, so I’ll activate him for sure (gulp). I like A.J. Allmendinger next, but I’m all out of ‘Dinger starts, and with all the chaos at Richard Petty Motorsports (RPM) this week, I’m not sure I’d activate him anyway.

I will choose between Paul Menard, Regan Smith and Scott Speed, whom I rate in that order. I’d normally go with Menard in a flash, but again, the RPM problems worry me. I’ll likely go with Smith.