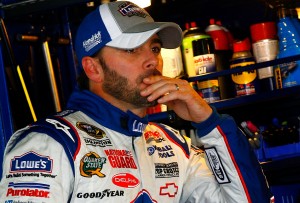 Jimmie Johnson watches his team work on the 48 during practice Thursday. Surprisingly, he's not the favorite for tonight's race. (Photo Jason Smith/Getty Images for NASCAR)

The NASCAR Sprint Cup teams got in all three practice sessions and qualifying at Charlotte Thursday and Friday, including an all important Happy Hour Friday evening. The Happy Hour session occurred after dark, better mirroring the track conditions the teams will face in tonight’s race than the mid-day practices did.

To handicap the race, I crunched the numbers from those prelim sessions to produce initial rankings, and then I merged those rankings with the historical rankings I produced earlier this week (weighting the results heavily toward the initial rankings). Finally, I tweaked the results by considering starting positions, 10-lap averages during practice and the opinions of another online expert.

The results are pretty interesting. Several top-five regulars stumbled in the prelims, and a number of typically second-tier drivers ran really well. Check it out:

Martin was on my radar earlier this week, but I never imagined he’d end up being my pick to win. However, he looked fast on short runs and long runs in practice, and he claimed an excellent starting spot (and the accompanying pit stall) in qualifying (4th). This may well be the weekend the old man shows us he’s still got some sauce.

Newman was my mid-week #2 pick, and his prelim performances were very strong. I rated Kahne #1 on Thursday, and while he was definitely good in the prelims, he looked a tick behind my top picks. Kyle Busch could easily win, and I expect to see Edwards up front tonight, too.

What about Johnson, my mid-week #3? Surprisingly, he looked relatively mediocre in the prelims (by the 48 team’s standards, of course).  Jeff Gordon captured the pole in qualifying, but he appeared to be pretty far off in the three practice sessions. Tony Stewart was in my top 10 Thursday and had a lot of fans among other online handicappers prior to the prelims, but he too stumbled Thursday and Friday.

My Yahoo! Fantasy Picks
Group A
As I noted in my Thusday preview, I failed to change my Yahoo! team from Fontana before the deadline, so I Group A I have Greg Biffle and Jeff Gordon. I got lucky: Gordon won the pole, giving me bonus points, and Biffle looked pretty good in Saturday’s practices. I’ll start Biffle.

Of course, Martin and Kyle Busch look dynamite, and Carl Edwards, Kurt Busch and Jimmie Johnson offer good value, too (in that order).

Group B
I’ll start Jamie McMurray and Jeff Burton over Matt Kenseth and Kevin Harvick. I certainly wish I had Ryan Newman available, and I also rate Martin Truex Jr. and David Reutimann right there with Burton.

Oh, and I’d love to run Kahne as well—unfortunately, I’m out of Kahne starts.