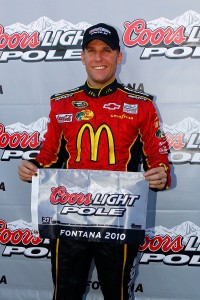 As expected, the Fontana, Calif., area enjoyed excellent, consistent weather Friday and Saturday, so the NASCAR Sprint Cup teams got in all three practice sessions and qualifying. To handicap Sunday’s race, I crunched the numbers from those sessions to produce initial rankings, and then I merged those rankings with the historical rankings I produced earlier this week (weighting the results heavily toward the initial rankings).

Finally, I tweaked the results by considering starting positions, 10-lap averages and the opinions of another online expert. I came up with this top five:

I liked Biffle in my mid-week preview (I rated him #4), but I didn’t imagine he could dislodge Johnson from the top spot in the prelims. Biffle looked very good on short and long runs in practice, however, and he’s got a decent starting position (he rolls off sixth). Add all that to his strong historical numbers, and the Bif is my pick to win.

McMurray vaulted way up my rankings thanks to lightning fast one-lap numbers in all four sessions, excellent 10-lap averages on Saturday, and his most-excellent starting position (yes, he’s on the pole).

What about Johnson? Don’t get me wrong: The 48 looked solid in the prelims, and he could easily challenge for the win on Sunday. He didn’t put up dominating numbers, however, and frankly seemed to be just a tick off. Remember, though, Johnson and crew chief Chad Knaus have made their living improving their race cars better than everybody else. Think twice before you bet against them. 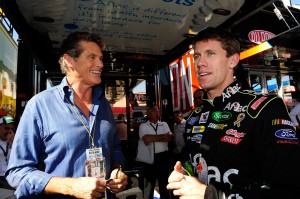 Yes, that's The Hasselhoff hangin' with Carl Edwards before the Nationwide race on Saturday. (Photo Rusty Jarrett/Getty Images for NASCAR)

In my preview on Thursday, I rated predictability about average, and I’m holding to that. Bettors should therefore take a straight-forward approach to line shopping, and fantasy NASCAR players should refrain from saving driver starts unless the value offered by a nine-start guy and a non nine-start guy is very close. Especially this late in the season.

My Yahoo! Fantasy Picks
Group A
I’ll start Biffle over Gordon. If I had Johnson paired with anybody but Biffle, Gordon or Mark Martin, I’d run Johnson.

About Martin: He looked very good in the prelims and is my sleeper pick in Group A.

Group B
I’ll run McMurray and Kenseth over Kevin Harvick and Jeff Burton, but I do rate Harvick and Burton #3 and #4 in Group B, respectively.

Kasey Kahne offers good value as well, and I like Joey Logano sixth in B.