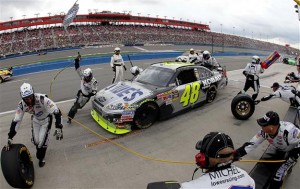 Jimmie Johnson gets his car serviced during his winning run at Fontana in February. (Photo Jason Smith/Getty Images for NASCAR)

This week the series heads back to Fontana, Calif., for a run on Auto Club Speedway. Auto Club Speedway is a 2-mile, D-shaped track with only 14 degrees of banking in the turns. These specs place it near those of the tracks at Michigan, Kansas and Chicagoland. The series has already run at the aforementioned tracks this season (including twice at Michigan), so we have substantial historical data (i.e., practice, qualifying and race data) at our disposal this week, and that alone improves this race’s predictability quite a bit. In addition, Weather.com says the speedway area should receive clear, warm, consistent weather all race weekend, further bolstering predictability.

However, like Michigan and Pocono, Fontana is a big, big track, and that increases that chances fuel mileage and the accompanying pit-road tactics will come into play during the race. That decreases predictability because pit-road/fuel-mileage tactics can really shake up the finishing order if they come into play.

So, all in all I rate predictability this week right about average. Bettors should therefore take a straight-forward approach when line shopping, and fantasy NASCAR players can consider saving driver starts if the value offered by two drivers is somewhat close. Of course, with so few races remaining on the schedule, I think fantasy players should just about be done with start saving. I saved quite a bit earlier this season, so I’m already in “run ’em if you got ’em” mode.

Handicapping Fontana
For this race, I examined the practice, qualifying and race data for the 2010 races at Fontana, Michigan and Chicagoland and Kansas to produce initial rankings. Then I crunched just the numbers for the February race at Fontana and merged those results with the initial rankings to bias the results toward the Fontana numbers. Finally, I tweaked those rankings after reading the opinions of other online handicappers and ended up with this top 10:

Johnson stands head and shoulders above the field so far this week, but beware the Richard Childress Racing cars of Burton and Harvick. Both look outstanding in the numbers, and that’s slightly unusual because those two typically don’t look great in practice and qualifying, and that hurts their overall numbers. (Note: Clint Bowyer’s numbers look great, too, but the loss of his crew chief prompted me to drop him down out of the top 10.)

Group A
I’d activate Johnson if I had any starts remaining. I don’t, so I’ll activate Gordon and Biffle instead.

Group B
Burton and Harvick will definitely make my roster, but I’m not quite sure which way to go between Joey Logano, Jamie McMurray and Matt Kenseth for the final two spots.

Group C
I like Paul Menard tops in C this week, followed by Sam Hornish Jr., A.J. Allmendinger, Scott Speed and Regan Smith, in that order. They all look grouped pretty tightly together, however.