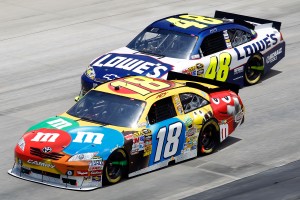 The Sprint Cup series returns to Dover, Del., this week for a run on Dover International Speedway, a 1 mile, steep-banked, concrete track known as The Monster Mile. We should enjoy decent predictability this weekend because 1) we have solid 2010 practice, qualifying and race data to review from Dover and two other shortish-banked tracks, Bristol and Darlington, and 2) Weather.com Dover will receive dry, warm weather on Friday and Saturday, with a chance of showers on Sunday.

Handicapping Dover
I examined the practice, qualifying and race data from all the 2010 races at Dover, Bristol and Darlington to produce historical rankings. Then I looked at the same data for just the Dover race in May, and I merged those results with the historical rankings, thereby making the rankings much more Dover-specific.

I tweaked those initial rankings with the opinions of other online NASCAR handicappers and my own race-recap notes from the May Dover race to come up with this top 13:

Johnson and Kyle Busch stand out in my data, and they seem to be the clear mid-week favorites around the Internet as well.

Hamlin, on the other hand, seems to be off everyone’s radar because aside from the May race, he has a history of poor finishes at Dover (he managed to finish 4th in May). It’s important to note, however, that he had a very strong car in many of those races and finished poorly simply due to bad luck—e.g., crashes, penalties, mechanical issues, etc. When you’re dealing with a small sample size of data—six race-result charts, for example—bad luck events can really throw the analysis out of whack. Bottom line: Hamlin is strong in the overall practice, qualifying and race data for the 2010 weekends at Dover, Bristol and Darlington, and he therefore deserves a high mid-week rating.

My Yahoo! Fantasy Picks
Group A
I’m out of Johnson starts, so I’ll activate Kyle Busch and Hamlin. I like Edwards quite a bit as well this week.

Group B
I’m out of Kahne starts, so I’ll activate Truex, Newman and Reutimann.

For the fourth spot, the numbers say I should go with Burton or Bowyer, but I’m thinking of activating Kenseth because I have many Kenseth starts remaining and few Burton/Bowyer starts. I’ve got three solid drivers already in Truex, Newman and Reutimann, and it’s really not that big of a gamble to slip Kenseth in there ahead of the RCR guys.

My B sleeper: Jamie McMurray

Group C
Allmendinger is far and away the top guy in C this week. He had a very strong car at Dover in May, strong enough to challenge Johnson for the lead at one point. A series of errors brought him back to earth that day, but the numbers suggest he’ll be strong again on Sunday.

After the ‘Dinger, I rate Sam Hornish Jr., Paul Menard, Scott Speed and Regan Smith in that order but bunched very tightly together. I’ll activate Hornish and Menard because I’m not concerned about saving their starts.