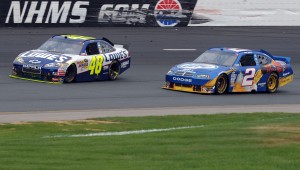 The 48 and 2 dueled late in New Hampshire's June race, but ultimately Johnson tossed the Miller Lite car aside like an empty beer can. (Photo Drew Hallowell/Getty Images for NASCAR)

The NASCAR Sprint Cup series kicks off the Chase with a return to Loudon, N.H., this week for a run at New Hampshire Motor Speedway (NHMS). NHMS is an oval measuring roughly 1 mile in length with little banking in the turns. These specs place NHMS squarely in the short-flat track category, which includes Martinsville, Phoenix and Richmond. Fantasy NASCAR players and those handicapping NASCAR therefore have a healthy amount of historical data to review this week, and lots of data generally improves race predictability.

In addition, NHMS is bigger than the congested, bumper-car tracks at Martinsville and Bristol, and smaller than the massive flat tracks (e.g., Michigan, Pocono, etc.) that tend to promote fuel-mileage tactics. Weather.com calls for morning showers on Friday, but consistent, warm, dry weather for the rest of the race weekend. And Jayski’s Goodyear Tire Notes indicate the Sprint Cup cars will run the same tires this weekend as they did in New Hampshire earlier this season and both races last season, giving a final boost to predictability.

Add all these factors together, and I think race predictability is above average this week. Bettors can therefore consider somewhat tight betting lines, and fantasy players should forego start saving this week—run your big-gun drivers.

I tweaked those initial rankings with the results and impressions drawn from last week’s race at Richmond (another short-flattie), the opinions of other online NASCAR handicappers and my own race-recap notes from the June New Hampshire race.

Jimmie Johnson is the clear favorite heading into practice and qualifying. He had the top car at New Hampshire in June (and won the race), he was pretty strong at Richmond last week and he’s been strong on the short-flats in general this year. Plus, this weekend kicks off the Chase, and we all know how the 48 team tends to rise to the occasion in the Chase.

I think Clint Bowyer is the clear #2 car, but after Bowyer, the picture isn’t too clear. I won’t be surprised if there’s movement in the #3–#11 spots following the preliminaries because those drivers are grouped pretty tightly in my numbers.

My Yahoo! Fantasy Picks
Group A
I would definitely activate Johnson if I had any Johnson starts remaining, but I don’t, so I’ll probably line up with Gordon and Kyle Busch. Really, though, I think it’d be hard to go wrong with Hamlin, Montoya, Stewart or even Kurt Busch.

Group B
I’m not saving starts this week, so my lineup is easy this week. Per the above rankings, I’ll activate Bowyer, Newman, Harvick and Burton.

Sleeper pick: Marcos Ambrose. Just in case you’re all out of starts for one of the above four drivers.

Group C
A.J. Allmendinger looks tops in C, but I’ve used him up. I like Sam Hornish Jr. second-best by a big margin over the rest of Group C, so I’ll activate him an hope he keeps ‘er out of the wall.

After Hornish, Paul Menard, Scott Speed and Regan Smith are bunched tightly together in the numbers, in that order. I’m pretty well set with Hornish and Menard starts for the rest of the year, so I’ll likely activate Menard, but I’m thinking of going with Smith instead just to conserve Menard starts. I know I’ll want to run Menard a lot on the bigger tracks as the season winds down.