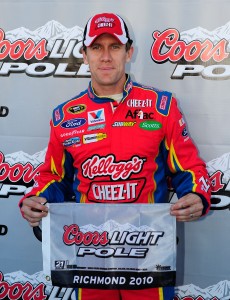 The Sprint Cup teams got in both practices and qualifying at Richmond yesterday under warm, sunny skies. Today’s forecast on Weather.com calls for more rain-free weather today and tonight, and that boosts predictability.

In addition, according to the Goodyear tire notes on Jayski.com, the teams are running the same tires they did in the May race, and that boosts predictability as well because it allows the teams to lean heavily on their notes from the May race. Finally, we already had solid historical data to review prior to yesterday’s preliminaries, which I discussed in my mid-week preview.

In that preview, I rated this race’s predictability above average, and I don’t see anything to alter that view. (In fact, I would rate predicability even higher if practice and qualifying hadn’t shaken up my rankings so much—see below.)Fantasy players can therefore be a bit aggressive with start saving, and bettors can consider taking slightly tighter lines than normal.

Handicapping Richmond II
I ran the numbers from the two practices and qualifying to produce new rankings, and then I merged those rankings with my mid-week rankings (heavily weighting the results toward the new rankings). I tweaked those results per the 10-lap averages from both practices, and then I did one last fine-tuning after reading the opinions of other online experts and considering starting positions.

I came up with this top five:

The preliminaries really scrambled my mid-week rankings. In the biggest move, Edwards jumped from #8 to #1 with his work yesterday. His car appears to have a lot of speed, and although his long-run ability is a little suspect, I think that possible negative is balanced by his starting spot on the pole and his strong historical numbers.

Bowyer also made a nice jump up to #2 from #7. Like Edwards, he appears to have mucho speed on the short runs, questionable speed on the long runs, and an excellent starting position and historical numbers.

There is an extra variable with Bowyer, of course: He’s clinging to 12th in the point standing in this final race-to-the-Chase, and it’s possible he’ll be looking to play it safe tonight to ensure he makes the Chase. A report during the qualifying telecast yesterday indicated he will not change his approach and will go for the win like normal, but even if I hadn’t heard that report, I’d hesitate to shelve Bowyer based on what I speculate may be going on inside he and his teammates’ heads. The numbers point to a strong run for Bowyer, and I much prefer data-based handicapping over mind reading.

Newman and Johnson also look excellent, and Montoya jumped up on my chart with strong performances yesterday as well.

Finally, what about Kyle Busch and Jeff Gordon, whom I ranked #1 and #2 in my mid-week preview? I don’t know what’s going on with those cars, to be honest. Both appeared mediocre on short and long runs yesterday, which is puzzling because they were both so strong on the same track on the same tires in similar temperatures in May. Maybe their cars will come to life when it’s cool tonight, but I’m steering clear of them for now.

My Yahoo! Fantasy Picks
Group A
I’ve got Gordon and Kyle Busch (sigh), and I’ll start Gordon because he looked a little better Friday and he starts 10 spots ahead of Busch.

I sure with I’d taken a chance with Edwards. I liked him as a dark horse in my preview, and he’s a great value bet today in fantasy racing.

Group B
I’ve got Newman and the three Richard Childress Racing cars, and I’ll go with Newman and Bowyer for pure value.

I think very highly of David Reutimann as well. I rate him #6 overall and think he offers excellent value.

Joey Logano makes a fine dark horse tonight. He too offers good value, and he’s a start saver if you’re so inclined.

Group C
A.J. Allmendinger looks very good—there’s an outside chance he’ll pull off a top-10 or so tonight.

I’m out of ‘Dinger starts, of course, so I must choose between Paul Menard and Regan Smith. According to the numbers, Menard is the clear choice.

My sleeper pick: Scott Speed. Speed put up the second-best 10-lap average in Practice 1 yesterday, and while I certainly don’t rate him very high overall, he could easily run very well by Group C standards.