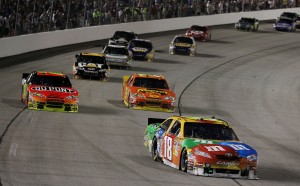 Kyle Busch got past Jeff Gordon on the final restart to win at Richmond in May. (Photo Al Bello/Getty Images)

The Sprint Cup circuit heads back to Richmond, Va., for another Saturday night race. Richmond International Raceway (RIR) is a .75-mile track with 14 degrees of banking in the turns, and that lumps it into the short-flat track category (Phoenix measures 1 mile long with 11 and 9 degrees of banking, for example). It typically produces good racing, and from a fantasy or handicapping perspective, it offers decent predictability, too.

We have a decent amount of historical data from the May race at RIR, although the Saturday night schedule squeezed practice and qualifying into Friday, cutting one practice session from a typical weekend (from three down to two). We also have solid data from the other 2010 short-flat races run so far this year at New Hampshire, Martinsville and Phoenix.

As of this morning, it appears RIR will have sunny, clear weather on Friday, so the teams should get in all the scheduled practice and qualifying. However, Weather.com says there’s a 30% chance of rain on Saturday, and rain could de-rubber the track or even cause a race stoppage and give us a wild-card winner.

Still, despite the possibility of rain on Saturday, I currently rate Richmond’s predictability above average.

Handicapping Richmond
I analyzed the practice, qualifying and race data from the 2010 races at Richmond, New Hampshire, Martinsville and Phoenix to produce historical rankings. Then I looked at just the Richmond numbers to produce Richmond-specific rankings, and I merged those two sets of rankings (heavily weighting the results toward the Richmond rankings). Finally, I tweaked things a bit according to my notes from the May race at RIR.

I came up with the following top eight:

Gordon and Busch were the class of the field at RIR in May and are the easy top picks prior to the preliminaries. Also, at that May race Burton’s car really came to life as the track cooled, and Edwards came from nowhere to work his way into contention. Keep your eye on those two during the preliminaries on Friday.

My Yahoo! Fantasy Picks
Group A
I will cheerfully activate Busch and Gordon. Johnson should also run well, and as I noted above, Edwards could have a good piece this weekend, too.

Group B
I’ll activate Newman, Burton, Harvick and Bowyer and run whoever looks strongest because with above-average predictability, I’m not looking to save driver starts.

If I were looking to save starts, I’d likely tab Joey Logano or Martin Truex Jr.

Brad Keselowski and David Reutimann look almost as good as Logano and Truex.

Group C
A.J. Allmendinger looks tops to me in C, but I’m all outta ‘Dinger starts. I like Paul Menard, Sam Hornish Jr., Regan Smith and Scott Speed next, in that order. I’ll activate Menard, and I might pick Smith over Hornish because they’re about dead even in my book and I wouldn’t mind saving a Hornish start if possible.