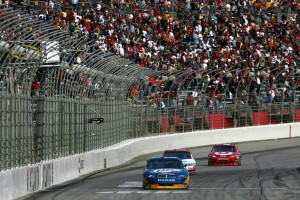 This week the NASCAR Sprint Cup Series returns to Georgia for a run at Atlanta Motor Speedway (AMS). AMS is a 1.5-mile, D-shaped track with 24 degrees of progressive banking. These specs make AMS very similar to the tracks in Charlotte, Texas and, to a somewhat lesser degree, Las Vegas. We already have decent practice, qualifying and race data from all three of these tracks this year, plus the data from the Atlanta race in March, and I think that allows us to get a very good handle on who should run well on Sunday.

Handicapping Atlanta II
I crunched the 2010 Las Vegas, Atlanta, Texas and Charlotte data to produce initial driver rankings, and then merged those results with the rankings produced by running just the Atlanta data (thereby tilting the results toward the Atlanta numbers). I came up with a top 10 I feel pretty good about:

I’m a little surprised to see Kahne #1 (I think it’s the first time I’ve rated him on top), but this year’s numbers from these banked cookie-cutter tracks say he should run very well this week.

It’s no surprise, however, that all four Hendrick Motorsports cars cracked the top 10 this week. Johnson and Gordon have torn up the banked cookies this year, and while not as spectacular, Dale Jr. and Martin have run well, too.

Weather.com says AMS will get good, consistent weather Friday and Saturday, so we should get good practice and qualifying data to review prior to Sunday’s race.

My Yahoo! Fantasy Picks
Group A
Here goes the first time for what will surely become a familiar refrain as the season winds down: I don’t have any Johnson starts remaining, but if I did, I’d get him in the lineup this week.

Sans Johnson, I’ll line up Kurt Busch, and probably Kyle Busch, too. Though Jeff Gordon is pulling at me hard.

Sleeper pick: I liked Martin a lot heading into Atlanta I, and although he finished very poorly (33rd), my race-recap notes suggest he did have a strong car. He fell back through the field early, but after a pit stop began marching right back up toward the front. A flat tire sent him back down, but he’d climbed back into the teens before a wreck finished his day. 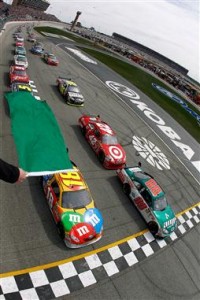 Sleeper pick: Marcos Ambrose is showing relatively well in the historical numbers. If you’re looking to save big-gun driver starts, activating Ambrose might give you a chance to do so if he looks good in the prelims.

Group C
I rate Paul Menard #1 in the third tier, and a good thing, too, because while I have many Menard starts remaining, I’m all out of A.J. Allmendinger (who I rate #2 in C).

I’ll activate Menard, but I’m not sure yet who I’ll go with between Scott Speed, Sam Hornish Jr. and Regan Smith. I rate those three very close together.