“Kevin Harvick has run well for the past three weeks, and that gives him momentum going into this weekend. Put him on your roster.”

I see recommendations like this in lots of fantasy NASCAR blogs, forums, and articles written by experts. Dan Beaver, a columnist for Yahoo! Sports Fantasy Auto Racing, seems especially smitten with momentum. Pretty much every race preview he writes for Yahoo!’s fantasy players contains recommendations based on driver momentum.

So, what’s this all about? Is there some sort of mysterious force at work that prolongs lucky streaks? Do drivers on a hot streak gain some sort of mental advantage over their competitors? Does success on one type of track beget success on another?

Let’s start with a simple game that does not have any human input. Say you flip a coin and it comes up heads five times in a row. On the sixth flip, does momentum make it more likely to come up heads again? Or less likely? Neither, of course. The odds are 50-50 every single time you flip the coin no matter what happened on the previous flips. In a pure, luck-based game with zero human input, momentum does not exist.

Clearly, stock car racing is vastly more complicated than flipping a coin. But there is an enormous amount of luck in racing, and the point of the above example is to illustrate that the odds of something lucky or unlucky happening to a driver during a race remain the same regardless of what has happened before. 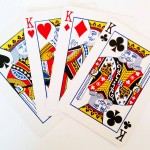 What about games that include human input? Consider something a little simpler than a NASCAR Sprint Cup race—poker. Say you’re playing Texas Hold ‘Em with five buddies, and you start running well. You win seven of 10 hands thanks to a successful bluff, some terrific hole cards, and some draws that come in. Now, for the 10 hands to come, do you have momentum that will help keep the hot streak going?

From a pure luck perspective, not at all. Your past hot streak has no bearing on the cards you will receive going forward. The odds of receiving pocket Aces is the same now as it always is.

From a people perspective, you might gain a bit of a mental advantage, and I suppose you could label that “momentum.” Your buddies are bound to have noticed you are on fire, and they may adjust their play in ways that help you continue winning. They might fold better hands, for example, or incorrectly fold a good draw in order to get out of your way.

Of course, it could go the other way, too. Some of your buddies might begin playing back at you aggressively with bluffs, or passively with loose call downs, thinking, “He can’t have it again!” Depending on your cards, that could help or hinder you.

And what about your play? You might begin playing with more confidence, and if that helps you make the correct plays, your chances of winning go up. Then again, if you aren’t an expert, it could cause you to confidently begin making incorrect plays. Or maybe you get full of yourself and begin making bluffs in bad spots.

And therein lies the problem: In games that include human input, it’s really hard to identify exactly how a player’s recent success will affect how their opponents play them, and how it affects the hot player’s game. Especially for observers.

Behind the Wheel
That brings us back to racing. From a luck perspective, is momentum a factor? Not at all. A driver on a hot streak is no more or less likely to get caught up in a wreck, suffer an equipment failure, etc.

From a people perspective, can a hot streak give a driver momentum (i.e., a mental advantage)? Maybe. Maybe he and his team grow more confident and motivated, and their performance edges up. Maybe opponent drivers begin making it easier for the hot driver on the track. Maybe other drivers and teams lose motivation as their morale slips.

Alas, it could go the other way. Hot drivers can become over confident and make poor decisions as a result. Heck, with some people, running hot can even bring on boredom as the challenges appear to get easier. The same applies to the opponents: The hot driver might de-motivate them, or motivate them to work harder to bring him down.

The point: Just like at the poker table, accurately calculating the affect of a hot streak on a driver/team and their opponents is pretty much impossible. Especially for us folks observing from a distance. I have enough trouble figuring out what’s going on in my own head, much less the heads of 43 drivers and all their team members.

For the sake of argument, though, let’s say you are able to somehow identify a driver whose run-good has caused him and his team to work harder/better, and you’re confident the other drivers/teams aren’t altering their efforts in response to the hot streak. How much does this really improve the driver’s performance? Maybe one percent? Aren’t Sprint Cup racers already operating at a very high level, like professional athletes in other top-level sports?

Conclusion
Dan Beaver’s March 7 preview for the race in Atlanta begins, “Momentum is a powerful force; it is also unpredictable.” I think the first phrase is wrong—at best, momentum offers a pretty slight mental edge (assuming you can correctly calculate it), and momentum simply doesn’t exist when it comes to luck.

More interestingly, the second half of that sentence nicely illustrates the contradiction in momentum thinking. That is, if you can’t calculate how a racing factor will affect driver performance, why would that factor have any predictive value? The answer: It doesn’t. Don’t waste time trying to calculate and apply racing factors that have no predictive value.

3 thoughts on “Debunking the Momentum Myth”