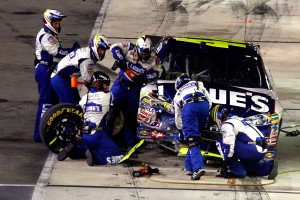 The 48 suffered serious damage when Juan Pablo Montoya elected to put him into the wall. (Jason Smith/Getty Images)

Bristol Motor Speedway put on another fun show last night with lots of on-track action. Some of that action tore up some of my pre-race favorites, unfortunately. Here’s a quick run down of what happened to my top six:

Jimmie Johnson: Johnson had a fantastic car and led many laps, but just as he and Kyle Busch were poised to engage in a thrilling duel at the front of the field, Juan Pablo Montoya inexplicably hooked Johnson and sent him on a bash-up ride into the wall. Johnson had to go behind the wall to make repairs; he finished 35th many laps down.

Juan Pablo Montoya: Montoya had at least a top 10-ish car, and after he eliminated one of the top cars in Johnson’s 48, it appeared he was in good position to challenge for the win. He ultimately wasn’t as fast as Busch and several other drivers, however. He finished 7th.

Jamie McMurray: McMurray had a terrific car, and he overcame two blunders on pit road to roar up through the field (twice!) and challenge for the win. At the end, though, he was a tick slower than Busch and David Reutimann.

Jeff Burton: Burton had a only a top 15-ish car early, and the 31 never really seemed to improve. He finished 16th.

Ryan Newman: Newman was top-10 material early, and he inched up toward the top five throughout the race. He finished 6th.

Tony Stewart: The 14 had race-winning potential, but early damage (he was rear-ended) sent his night on a downward spiral. He finished 27th.

My Surprise of the Night
I knew Kyle Busch is a terrific driver at Bristol, but given his performance at Bristol in March and the preliminaries last Friday, I didn’t think he had much of a car to work with. The 18 team found something, though, allowing Busch to power up through the field and dominate the end of the race for the win.

Also, I remembered David Reutimann was strong in the March race before his engine failed, but like the 18, I didn’t think much of his machine in Friday’s preliminaries. The 00 proved strong all night, however, and was just a bit slower than the 18. He finished 2nd.