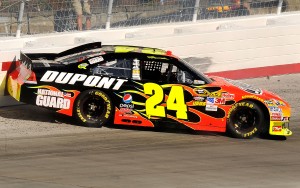 Jeff Gordon spun while getting up to speed for his qualifying lap. Because he hadn't yet crossed the start-finish line, he was allowed to get four fresh tires and run again. (Rusty Jarrett/Getty Images for NASCAR)

The NASCAR Sprint Cup teams got in both practices and qualifying yesterday, and it became clear during Practice 1 that this August race at Bristol will not be a simple re-run of the March race. The teams are running completely different tires on both sides than they ran in March, and it appears the change essentially rendered the teams’ March notes useless. It looked like crew chiefs were doing far more than simply tweaking their March setups, and many of the drivers ran all over the track trying to find the best line. At one point during the Practice 1 telecast, viewers saw Clint Bowyer standing atop the hauler so he could observe the other drivers to see where they were running, braking, etc.

In another blow to predictability, the speed-chart data produced during the prelims proved less than wonderful. In Practice 1, for example, A.J. Allmendinger and Dale Earnhardt Jr. ran the fastest race-trim laps, but both drivers strongly disliked their cars. Junior even got into another sniping battle with his crew chief, complaining the car was “crashing every lap,” “crap” and “tight, tight, tight.” Allmendinger was so loose he spun twice. Bottom line: One fast lap does not a winning car make.

In my mid-week preview, I rated this race’s predictability a bit above average, but I’m gonna downgrade that to a bit below average. Fantasy NASCAR players can therefore be a little aggressive in saving starts, and bettors can work with slightly tight odds.

Handicapping Bristol II
As noted above, the data produced Friday was not as helpful as anticipated, so I performed some extra steps in my analysis today. First, I did go ahead and crunch Friday’s numbers as usual, and then I merged those results with my mid-week rankings (giving more weight to Friday’s results) to produce initial rankings. I then went through three rounds of tweaking those rankings: First I tweaked them as needed per the 10-lap averages produced during the practices. Then I tweaked them to reflect the drivers’ starting positions (starting position is key at a shorty like Bristol). Finally, I fine-tuned them to reflect the impressions myself and another online expert gathered during the telecasts.

The results, with the best online odds I could find today:

I rated Johnson, Montoya and McMurray very high in my preview, and they still look very strong to me.

Aside from those three, though, there’s been a lot of movement. Kurt Busch plunged down out of my top 10, and Jeff Gordon, Denny Hamlin and Joey Logano tumbled as well. In addition, Jeff Burton, Tony Stewart and Ryan Newman have surged up into my top six.

My Yahoo! Fantasy Picks
Group A
I’ve got Johnson and Kurt Busch, and although I’d like to save my last Johnson start, the gap between he and the 2 is just too big. Hopefully the 48 will bid me a fond farewell.

As noted in my top six, I think Montoya is a great pick in Group A today, and Tony Stewart as well.

Group B
I have McMurray, Burton, Logano and Matt Kenseth. There’s no way I can run Logano despite his good starting position; he just didn’t look that good aside from his qualifying lap. I’ve gotta run McMurray, my #3 overall pick, but I’m not quite sure which way to go between Burton and Kenseth. I rate Burton four notches higher, but I have many more Kenseth starts remaining than Burton. Hopefully Mark Garrow’s crew chief notes will help me decide.

Newman also looks very good, and Martin Truex Jr. makes a good darkhorse. If you’re feeling frisky, Dale Jr. is another start-saver option. I didn’t like what I heard from him and his crew chief on the radio Friday, however.

Group C
A.J. Allmendinger looks like the class of C again, despite spinning twice in practice. I have him paired with Regan Smith, and Smith didn’t show much of anything Friday. This will be my final Allmendinger start.

Scott Speed and Paul Menard look to be so-so alternatives to the ‘Dinger.