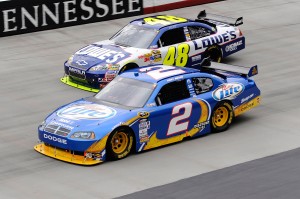 Kurt Busch and Jimmie Johnson combined to lead six different times for 110 of the first 116 laps at Bristol in March. (Photo Jason Smith/Getty Images for NASCAR)

This week the series returns to the very short, steeply banked track at Bristol, Tenn. Pit road and the pit stalls are extremely cramped at Bristol, which tends to lead to more delays, accidents and general mayhem than at bigger tracks. It’s also fairly easy to get caught up in someone else’s wreck at Bristol, and when the race goes green for awhile, the front runners quickly catch the tail end of the field, so they don’t get a peaceful, spread-out run for very long.

In addition, the quality and quantity of our historical data for this race are less than what we get for an intermediate-size track such as Charlotte. First, Bristol is a one-of-a-kind track on the NASCAR Sprint Cup circuit. You can (and should) look at the 2010 data from Bristol the two other shortish, banked tracks on the circuit—i.e., Dover and Darlington—but the value of that data is limited because those tracks are no where near as similar to Bristol as, say, Vegas, Texas, Homestead and Charlotte are to Atlanta.

Second, this week’s race runs on Saturday night, and the practice and qualifying schedule is therefore compressed into Friday. At press time, Weather.com says rain won’t be a problem on Friday, but we’ll still receive less data and lower quality data than we do for races with the typical Friday-Saturday-Sunday schedule.

None of the above bode well for predictability. However, despite the Bristol’s tight quarters and the somewhat limited data, race predictability isn’t too bad, particularly since the track altered the banking in 2007. Those changes allowed multiple-groove racing, greatly reducing the beating and banging that occurred in the single-groove racing common at Bristol prior to 2007.

Add that to the fact it appears rain won’t interfere with the preliminaries or racing, and I think we can safely rate Bristol’s predictability at a bit above average. Bettors can think about taking slightly worse odds than normal, and fantasy NASCAR players should exercise caution when looking to save starts for their big-gun drivers.

Handicapping Bristol
I compiled, sorted and examined all the practice, qualifying and race data from all the short-banked races in 2010, and then I examined just the data from the Bristol weekend in March. I combined the results of those two analysis (weighting the numbers toward Bristol in the process) to obtain initial driver rankings. I then read my Race Recap: Bristol post and tweaked the rankings accordingly.

I came up with this preliminary top 10:

Johnson and Kurt Busch stand above the field so far this week, but Gordon, McMurray, Montoya, Hamlin and Kenseth could easily challenge for the win as well.

My Yahoo! Fantasy Picks
Group A
I’ll activate Johnson and Kurt Busch, hoping like crazy Busch will look good enough in the prelims to allow me to save Johnson. I have only one Johnson start remaining, and seven Busch starts. 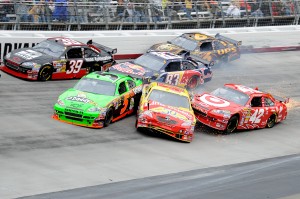 Montoya had a good car in March, but this melee dashed his chances. (Photo John Harrelson/Getty Images for NASCAR)

Gordon, Montoya and Hamlin should all provide good value as well.

Group B
I’m a little surprised the Richard Childress Racing cars aren’t showing up very high in my numbers. I rate Jeff Burton #5 in Group B, and Harvick and Bowyer are even further down the ladder. Hopefully I didn’t miss too badly on those drivers.

The good news is, my rankings allow me to run a bunch on non nine-starts guys purely for value. I’ll line up with McMurray, Kenseth, Logano and Truex.

Again, I rate Burton right behind Truex, and I also like Dale Jr. in the #6 hole.

Group C
Things are back to normal this week in Group C with A.J. Allmendinger standing atop the heap. I’ll line up with the ‘Dinger, and probably Regan Smith as well. My numbers say Smith and Speed are about even heading into the weekend, but the intangibles prod me toward Smith (i.e., he seems to be coming on, while Speed’s 82 team seems to be imploding, or at least scuffling).

I like Paul Menard and Sam Hornish Jr. next, in that order.