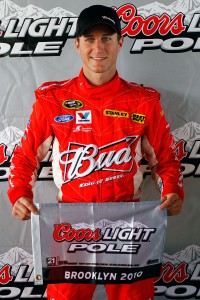 As expected, the NASCAR Sprint Cup teams got in all three practices and qualifying Friday and Saturday at Michigan International Speedway (MIS), giving those of us handicapping NASCAR or playing fantasy NASCAR a substantial amount of pre-race data to examine. In addition, according to the Goodyear Tire Notes posted on Jayski’s Michigan Race Info page, the teams are running the same right- and left-side tires at MIS this week as they did in the June MIS race, giving an extra boost to race predictability.

However, the weather forecast for MIS at Weather.com calls for a 10–20% chance of scattered thunderstorms late Sunday morning and continuing through the afternoon, and that hurts predictability a bit because rain would alter the racing surface from what the teams have seen so far this week, and it could also give us a wild-card winner via a rain stoppage. Plus, as I noted in my race preview, the odds fuel-mileage tactics will come into play at MIS are elevated because the big, wide nature of this track generally produces fewer caution flags than most other tracks on the circuit.

So, I still rate tomorrow’s race predictability at average, or maybe even a tick below. I therefore will look to save starts where possible on my Yahoo! fantasy team, and I recommend bettors take a straight-forward approach to the betting lines.

Handicapping Michigan II
To produce my updated driver rankings, I crunched this week’s practice and qualifying data, and then tweaked those initial rankings by comparing them to my mid-week rankings (giving more weight to the current rankings, of course). I further fine tuned the list with impressions gleaned from the practice and qualifying telecasts, and my general impressions of which drivers are trending up and down on MIS-style tracks.

The result? My mid-week rankings match up pretty well with what transpired on Friday and Saturday, with a couple notable exceptions. For example, I rated Jimmie Johnson, Greg Biffle, Jeff Burton, Kasey Kahne and Kurt Busch very high, and they all looked so strong in the prelims they comprise my top five.

On the other hand, I rated Denny Hamlin #1 in my race preview, but he looked relatively slow on the stopwatch in the prelims and tumbles down in my rankings. And, I didn’t really have Tony Stewart on my radar on Wednesday, but he was fairly sharp in the prelims, and as I’ve noted before, Stewart typically underperforms in the prelims, so when he looks good, look out.

Here’s my updated top six, with the best odds I could find online at press time:

I don’t this there’s any value to be had betting Johnson at 3.8-1. Biffle should be profitable at 8-1, and I like the lines on Burton and Kurt Busch, too. The lines on Kahne and Stewart are iffy, though.

My Yahoo! Fantasy Picks
Group A
I have Hamlin and Kurt Busch, and I think running the 2 is the call. If I had Johnson instead of Hamlin, it would be an interesting decision. I’d definitely start Biffle over the 2, and maybe Stewart, too.

I think Juan Pablo Montoya makes a good dark horse in Group A.

Group B
I’ve got Kahne, Burton, Dale Jr. and Joey Logano, and there’s no way I can run Junior or Logano. They didn’t look too good in the prelims, and Kahne and Burton looked great.

Group C
I’ve got Paul Menard and Regan Smith on my roster. I rate Menard #1 in Group C and think he has an edge over Smith, but that edge is slight enough that I’m going to go ahead and save Menard and run Smith.

For once, A.J. Allmendinger isn’t the top dog in Group C—I rate him third in the group. After the ‘Dinger, it’s a pick-your-poison choice between Sam Hornish Jr., Bill Elliott and Scott Speed, who all look about the same to me.