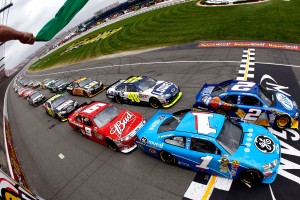 The NASCAR Sprint Cup series heads back to Michigan International Speedway (MIS) this week for another run on the 2-mile, D-shaped track with 18 degrees of banking. The series just raced at MIS in June, so fantasy NASCAR players and handicappers have very recent data to review, greatly bolstering predictability. In addition, Weather.com suggests at press time that the weather will be kind to the race teams on Friday, Saturday and Sunday, so we should get solid practice and qualifying data to review, and there’s little chance rain will mess with the race itself.

Sunday’s race enjoys above-average predictability then, right? No. Since the June race, I’ve thought long and hard about the races on the really big tracks, and I’ve concluded the chances fuel-mileage tactics will come into play are fairly high at these venues. Such tactics can turn a race’s running order upside down.

I therefore rate Sunday’s race predictability at flat average despite the good data and weather. Fantasy NASCAR players should look to save big-gun drivers if good opportunities arise (i.e., the value offered by a second-tier driver is in the ballpark), and bettors should take a straight-forward approach to the betting lines.

Handicapping Michigan II
I noted above I’ve altered my predictability rating for MIS a bit since the June race, and I’ve also rethought my data analysis process for this track. For my June preview, I placed MIS in the big-flat track category and crunched the practice, qualifying and race data from the 2009 Fontana and Michigan races, the 2010 Fontana race and the June Pocono race to obtain driver rankings. Upon further review, I see MIS features quite a bit more banking than Fontana and Pocono, so I’m not going to include that data in my Michigan II analysis, or the Indianapolis data (another very flat track), or the Pocono II data.

For the first MIS race next year, I will likely look at data from some of the big banked tracks (e.g., Las Vegas, Homestead) instead of the big-flat data (though Fontana will still get a look). For this race, however, I think we can get a very good feel for the favorites by looking solely at the June Michigan data, and then tweaking those results with impressions gained during the June race that don’t necessarily show up in the data.

That’s what I’ve done, and here is my preliminary top 10:

Hamlin and Kahne were outstanding at MIS in June and are easily the faves this week. Kurt Busch, Johnson and Gordon were just a tick off in June, and it’s entirely possible they will be in the hunt on Sunday as well.

Dale Jr. intrigues me this week. For the June race, he didn’t look all that strong in the historical data or the preliminaries, but on race day, his team must’ve found something because they moved forward all day. Keep your eye on that car during the preliminaries.

My Yahoo! Fantasy Picks
Group A
I will line up with Hamlin for sure, and either Kurt Busch or Jeff Gordon. Hopefully Busch and Gordon will shine in the prelims so I can save a Hamlin start.

Biffle and Edwards make good dark horses this week. Not only did they run well at MIS in June, the entire Roush organization seems to be coming on. Finally.

Group B
I will activate Kahne, Burton, Dale Jr. and Logano. Martin Truex Jr. is right there behind Logano, and I think Jamie McMurray, Kevin Harvick and David Reutimann are all very close to Truex, in that order.

Matt Kenseth doesn’t look too good in the data, but he might make a good dark horse. First, he rarely looks good in the data because he typically under-performs in the preliminaries. Second, surely some of the engine and chassis info from Biffle’s surging team is being shared with Kenseth’s team. In other words, surely the rising Roush tide will lift Kenseth’s boat.

Group C
I rate Paul Menard just outside the top 10 overall, so activating him is a no-brainer. I like A.J. Allmendinger next, but I might save my sole remaining ‘Dinger start and tab Regan Smith instead.

After Smith, the pickings look pretty slim in Group C this week.