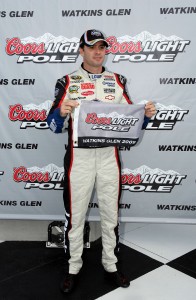 The NASCAR Sprint Cup series heads to Watkins Glen, N.Y., this week for a run at Watkins Glen International, a 2.45-mile road course featuring 11 turns (including right-handers) with a variety of banking ranging from 6 degrees to 10 degrees. Only twice a year does the series visit the twisty road courses at Sonoma and Watkins Glen, N.Y., and when it does, fantasy NASCAR players and handicappers must adjust to the fact that many of the regular Sprint Cup front runners just don’t run very well on road courses, and some of the typically slow drivers jump way up in value on these tracks. In addition, we must also ponder the value of the ringers—i.e., the road-course specialists imported into NASCAR just for these races.

As always, we must attempt to gauge the Glen’s predictability as well. On the down side, the historical data is relatively thin because we have only the two 2009 road-course races and the June race at Sonoma to evaluate (there’s little point in looking at any oval-track data this week, or any older data). In addition, the race is certain to feature a fair number of wrecks, and road-course wrecks have a tendency to collect other cars, a tendency the move to double-file restarts seems to exacerbate.

On the other hand, Weather.com’s forecast at press time calls for good weather at the Glen this week, with consistent temps, mostly sunny skies, and almost no chance of rain, so we should get good practice and qualifying data.

All in all, I think it’s safe to rate the Glen’s predictability a little below average. Sprint Cup bettors therefore need better odds than they do on more predictable tracks to remain profitable, and fantasy NASCAR players can be a little more aggressive than normal when looking to save driver starts (but shouldn’t go crazy ala Daytona and Talladega).

Handicapping Watkins Glen
I analyzed the practice, qualifying and race data from the 2009 Watkins Glen race and the June race at Sonoma. I then merged the results of those two analysis, making sure I weighted the numbers toward the Sonoma race because it was recent and the 09′ Glen data is old. Finally, I looked over my notes from the Sonoma race and tweaked my rankings accordingly.

Ambrose, of course, would’ve won at Sonoma this year if not for his colossal error in the closing laps (he managed to lose spots under caution when he turned off his car and then couldn’t refire it right away). The 48 team has clearly worked very hard  on its road-course program, so Johnson should challenge for the win as well.

I am a bit surprised to see Biffle, Allmendinger and Said rating this high, but that’s what the numbers say. Keep your eye on Said in particular during Friday’s and Saturday’s preliminaries. Word is he’s stepping into Red Bull’s 83 car this week, and that should be a decent piece of equipment for a ringer.

My Yahoo! Fantasy Picks
Group A
Because predictability is below average, I will save Johnson this week. I will activate Biffle, and either Montoya or Gordon.

Regarding Denny Hamlin, I looked up my Race Recap: Sonoma post and re-discovered the following tidbit:

“Shortly before the race began, the telecast announcers noted how the 11 team had spent very little time (i.e., two hours) and energy prepping for the 2010 road course races and would consider a top 10 a nice achievement.”

Group B
I will certainly activate Marcos Ambrose, and Kahne and McMurray as well. The numbers say I should also line up Harvick, but I’m thinking of saving him and tabbing Elliott Sadler or Martin Truex Jr. instead. Sadler took a brutal shot at Pocono on Sunday, though, so it might be prudent to avoid him even though he was walking and talking OK after the race.

Group C
Allmendinger appears to be the man in C this week, but I have only one of his starts remaining, so he’ll be riding the pine. Fortunately, as mentioned above, Said looks good this week, and Robby Gordon does as well.

I’m not seeing much else in Group C after those three.

Important: The schedule this week is a little different than normal. The teams practice twice on Friday, and then qualify and practice again on Saturday. The Yahoo! lock-down deadline isn’t until early Saturday morning, so Yahoo! players can (and should) see what transpires in Friday’s practice and tweak their rosters accordingly.