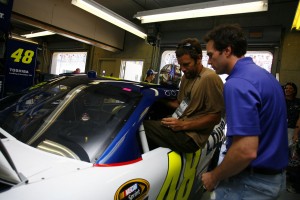 Today at Indy the NASCAR Sprint Cup teams got in two practices in preparation for Sunday’s race. I’m writing this quick update because Yahoo! Fantasy NASCAR players have until early tomorrow morning to lock down their rosters.

In the first practice, it appeared almost all the top-35 teams worked on race-trim setups, and then they all worked on qualifying setups in Practice 2. Many of my early week driver ratings seemed on the money, but a few drivers did force their way into the picture, and a few slipped down a bit.

After watching the telecasts and crunching the speed-chart data, I adjusted my original rankings to come up with this top 12:

I still think Johnson is the man to beat, but Montoya ran really well today. The question: Can he close the deal on Sunday?

Burton muscled his way into my top 7, and Stewart and Harvick slipped a bit.

My Yahoo! Fantasy Picks
Group A
I had Johnson and Stewart allocated, but I’m going to bench Stewart and activate the crazy Colombian alongside Johnson.

Again, Mark Martin looks to be a great dark horse in Group A.

Group B
I’m sticking with Bowyer and Newman, and I’m going to add Burton. The question is, do I also add Jamie McMurray and bench both Kahne and Harvick? It feels like a stretch, but JMac was fast today, his teammate Montoya was very fast, JMac has a good qualifying slot tomorrow a.m. and he’s most likely not a nine-start guy.

I think I just talked myself into it…

Martin Truex Jr. also surged up my rankings today; I rate him #7 in Group B.

Group C
I was prepared to take a minor gamble by allocating Sam Hornish Jr. and Reed Sorenson and benching A.J. Allmendinger, but the ‘Dinger looks too good and Sorenson not so good.

Also, Paul Menard jumped up my rankings a bit, and he now appears to be a good alternative to Hornish. I’ll allocate Allmendinger, and I’m leaning toward Menard because I have many Menard starts left and few Hornish starts.