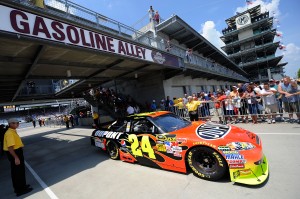 After a one-week break, the NASCAR Sprint Cup series picks back up this weekend with the Brickyard 400 at famed Indianapolis Motor Speedway. Indy is a 2.5-mile track with only 9 degrees of banking in the corners, and it’s a pretty symmetrical track (unlike the many d-shaped tracks on the circuit, for instance).

The giant, flat nature of this track typically limits the number of accidents and incidents on the track and pit road, but that same size can also bump up the probability fuel-mileage tactics will come into play. In addition, the series runs at Indy only once a year, so fantasy NASCAR players and handicappers don’t have very current, Indy-specific data to work with, and Indy’s unique design limits how many other tracks we can use to crunch data.

The weather forecast calls for mostly sunny skies Friday, a 40% chance on thunderstorms Saturday, and sunny skies again Sunday. So, Friday’s practice sessions should go off without a hitch, qualifying and/or Happy Hour on Saturday may catch some rain and the track should be good to go on race day.

All in all, I’m thinking race predictability for this year’s Brickyard 400 rates a little above average. NASCAR bettors can therefore find profitability in somewhat tighter odds than normal, and fantasy NASCAR players should limit how much start-saving they do unless the value offered by a big-gun driver and a start-saver driver is pretty close.

Handicapping Indy
I first crunched the practice, qualifying and race data for the 2008 and 2009 Indianapolis races, and then I examined that data for just the 2009 Indy race. I also ran the numbers for the 2009 and 2010 races at California, Pocono and Kansas (three tracks with varying shapes but relatively similar size and banking to Indy), and finally just the 2010 data for those three tracks.

I combined all the results to produce initial driver rankings, and finally I tweaked those rankings with the opinions of a couple online experts, and my impressions of who is trending up on the giant flats, and who is trending down.

My Yahoo! Fantasy Picks
Group A
I will activate Johnson, but I’m not sure yet whether I’ll also activate Montoya or Stewart. Stewart seems to be coming on, while Montoya seems to be bashing into everybody every week, so I’m leaning Stewart.

I think Mark Martin makes a fine dark horse this week in Group A.

Group B
I will activate Bowyer, Harvick, Newman and Kahne. I rate David Reutimann and Jamie McMurray #5 and #6, respectively, in Group B.

Sorenson is interesting this week. Historically, he’s performed well at Indy, and this week he’ll be in the 83 car, which has looked good at Indy and other big flats recently.

Important: This week we get to see Friday’s practice sessions before we lock down our Yahoo! rosters (the deadline is early Saturday morning). I highly recommend you Yahoo! players review how those practices go and tweak your roster accordingly before lock down. There’s always a chance your highly rated drivers will stumble on Friday, and/or your discards will surprise you with strong speed-chart numbers.