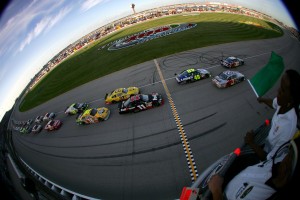 This week the series heads to Joliet, Ill., for a run on Chicagoland Speedway. Chicagoland is a 1.5-mile, d-shaped track with 18 degrees of banking in the turns. These stats place it squarely in the big-flat track category, along with the tracks at Michigan, California, Kansas, Pocono and Indianapolis. This means we have plenty of historical data at our disposal this week, and that alone improves this race’s predictability quite a bit.

Finally, Chicagoland is not as big as Michigan, Pocono, etc., so it typically sees fewer races decided by fuel mileage than the giant flat tracks. At the same time, it remains big enough to produce fewer of the on-track accidents and pit-road incident that rear their head at many of the smaller tracks on the circuit.

So, all in all I rate predictability this week above average. Bettors can therefore find value in slightly weaker odds than normal, and fantasy NASCAR players should refrain from saving driver starts unless the value offered by a nine-start guy and a non nine-start guy is pretty close.

Handicapping Chicagoland
I first examined the practice, qualifying and race data for all the big-flat track events in 2009 and 2010. Then I crunched the data for just the recent big-flat events, and I took the extra step of excluding the Indianapolis and Pocono data from that analysis because of all the big-flats, those two tracks are the least like Chicagoland. Finally, I crunched just the 2009 Chicagoland and Kansas data, plus the data from the Michigan race last month (Chicagoland and Kansas are very similar tracks, and although Michigan is bigger, it’s pretty similar, too).

I melded the results from those three analysis to produce initial rankings, and then I tweaked those rankings with my impressions of who is trending up on the big-flats, and who is trending down.

Jimmie Johnson topped the list, but I’m bumping him down to the #2 spot because his wife is due to deliver their baby any day now, and that event could pull him away from his car on race day.

Here are my initial rankings:

My Yahoo! Fantasy Picks
Group A
At a race with above-average predicatability, I typically don’t look to save driver starts even with 18 races to go. However, I will probably not activate Johnson—I have only two Johnson starts remaining, and why risk it with the threat of the baby looming over him? I will probably also steer clear of Martin because I while I can’t totally discount what the numbers are telling me and bump Martin way down in the rankings, I remain uncomfortable ranking him this high. 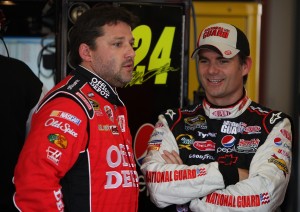 Stewart and Gordon talk during practice last year at Chicagoland.

So, I will activate Gordon and Hamlin, right? Maybe. I’m thinking of sitting Hamlin and activating Stewart because as mentioned above, I’m intrigued he’s showing up this high in my analysis. In that scenario, Gordon would provide a good backup plan should Stewart bomb in the preliminaries.

Group B
I have only four Bowyer starts remaining, but there’s no way I’m sitting him—he just looks too good. I will also likely activate Ryan Newman, Kasey Kahne and David Reutimann, who I rate #2, #3 and #4 in Group B, respectively.

Group C
A.J. Allmendinger and Sam Hornish Jr. look 1–2 to me this week, but Scott Speed and Paul Menard are in the picture, too (in that order). I have only three ‘Dinger and Hornish starts remaining each, and eight each for Speed and Menard, so I’m tempted to activate Allmendinger, sit Hornish and activate Speed or Menard. The ‘Dinger makes such a good backup plan this wouldn’t be a big gamble.

As always, stay tuned for my update following practice and qualifying.