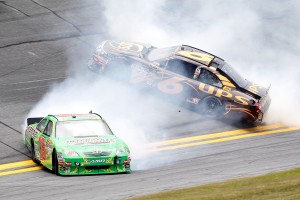 In my race preview a few days ago, I noted the many factors that made tonight’s race at Daytona very unpredictable—the problems that come with racing in packs, the poor data, the green-white-checkered and wave-around rules, the switch from the wing to the spoiler, and the rain in the weather forecast. Well, not only have none of these predictability factors changed, it’s clear after practice that from a fantasy NASCAR or betting perspective, tonight’s predictability is even worse than expected.

First, the practice and qualifying data is worse than expected because qualifying was rained out after only 12 cars posted runs. Also, rain remains a threat tonight according to Weather.com.

But far more important are the race conditions created by the spoiler, the large restrictor plate (NASCAR bumped up the size for this race due to the increased drag created by the spoiler compared to the wing), and the hot track. In short, the cars looked fast but all over the place in practice. Numerous cars crashed on Thursday, and it appears likely tonight’s race will be an exciting smash-’em-up affair, too.

Handicapping Daytona
I crunched the data from Thursday’s speed charts, but I kept in mind I wouldn’t be placing as much value in that analysis as I typically do because the cars mostly practiced in packs, greatly weakening the speed charts’ value.

Then I set about tweaking the resultant rankings. First, I noted the drivers who damaged their cars in practice (e.g., Dale Earnhardt Jr., Paul Menard, Joey Logano, etc.), who had to go backup cars (i.e., Kyle Busch, David Ragan, Kasey Kahne), and worst of all, who had to go to backup cars after the final practice (Denny Hamlin, Reed Sorenson, Robert Richardson and Tony Stewart). These last four drivers are really up against the wall because they will have turned pretty much zero laps in these cars before the race begins.

Then I factored in the impressions I gathered watching the Practice 1 telecast (for example, Carl Edwards looked loose and said he was loose), the impressions and opinions of other NASCAR handicappers around the ‘net, and the original rankings I put together on Wednesday.

I came up with the following:

The odds listed are the best I could find online this morning. I wouldn’t touch Gordon or Junior at those odds, but Biffle is interesting at 35-1, and heck, how can you go wrong getting 40-1 on Reutimann? With only 42 other cars in the field, surely there is some value in that line?

My Yahoo! Fantasy Picks
Group A
I started the week with Kyle Busch and Edwards activated, but after practice I dumped them and activated Kurt Busch and Biffle. I will likely start Biffle for value, and because there’s a chance Kurt Busch will come alive in the second half of the season and become a nine-start guy for me.

Gordon also looks good, but I’d hesitate to run him if I had him available. I’m pretty sure I’m gonna want all the Gordon and Jimmie Johnson starts I can get in the second half. 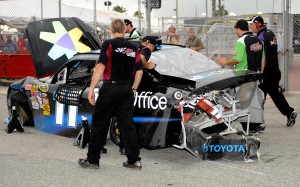 Kyle Busch went back out with a backup car and promptly wrecked his teammate, too (accidentally). (Photo John Harrelson/Getty Images for NASCAR)

I will likely run Earnhardt and McMurray, and bench Matt Kenseth and David Reutimann. I do like Reuty as a dark horse, however.

Bowyer and Burton look good, but beware burning their starts today unless you have a lot of starts remaining, and a healthy amount of Kevin Harvick starts remaining, too (these Richard Childress Racing guys are all nine-start guys this year).

Logano also an interesting option today. He looked pretty good, but he did ding his car a bit in the final practice.

Group C
A.J. Allmendinger is tops in C, but I wouldn’t burn one of his starts here even if I had him available. I’ve got Regan Smith and Bobby Labonte, and I’m pretty sure I’ll run Smith.

Sam Hornish Jr. might make a good pick in Group C, too. Of the 12 cars that made qualifying runs before the rain shut it down, Hornish had the pole.