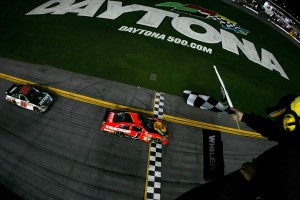 Back we go to the high banks of Daytona for the second time this season. This 2.5 mile superspeedway offers little predicability because like Talladega, NASCAR forces the teams to run a restrictor plate on the carburetor on this track. Without the plate, the cars would reach speeds way over 200 mph, posing an unacceptable risk to everyone on and near the track.

The problem with capping horsepower, of course, is that it tends to bunch the cars up in packs, and packs increase unpredictability in two ways. First, they produce an intense form of drafting tactics in which the cars form lines two- and three-wide. To get up front, drivers must draft in line and shuffle between the lines to move forward, and this gives drivers with average skills and equipment a greater chance running well than they do at non plate tracks. Second, the packs tend to produce big, demolition-derby style crashes. If one driver in a pack bobbles, surrounding cars have little chance of avoiding him, and mayhem results.

Two of last year’s rules changes have upped overall unpredictability as well: the wave-around and double-file restart rule, and the green-white-checkered rule. The wave-around rule allows many more cars to remain on the lead lap late in a race than before, and the double-file restarts give all of those lead-lap cars a shot at getting a good finish. And the green-white-checkered finish rule runs the lottery-style finish multiple times.

And, Daytona’s historical and preliminary data has far less value as a predictor than it does at other tracks. The post-qualifying practice data is pretty much worthless because the cars frequently practice drafting. The qualifying-run and qualifying data has a little value because it gives clues which cars have the most total speed when running solo, but of course during the race the cars rarely run solo.

In addition, a new factor has entered the picture since the Sprint Cup series last ran at Daytona to further blight predictability—the spoiler. The cars ran a rear wing at Daytona in February but now carry a spoiler, and the spoiler has changed things up a little.

And that’s not all: Weather.com’s forecast today calls for scattered thunderstorms at Daytona Thursday, Friday and Saturday, and rain can provide an inconsistent racing surface throughout the weekend, and even give us a wild-card winner with a rain stoppage.

So what’s the point of trying to handicap this race, right? Well, an analysis of Daytona and Talladega historical data does still provide some clues to who will be fast Saturday night. However, bettors can adjust by taking only exceptional odds, and fantasy NASCAR players should look to save starts for their nine-start drivers.

Handicapping Daytona
I examined the practice, qualifying and race data from Daytona’s February race (including the Duels data) and the same historical data from the spring Talladega race, and used that analysis to produce initial rankings (weighted toward the Daytona data). I then revisited my Race Recap: Talladega article to remind myself who stood out in that race, and used that info to tweak my rankings.

I’ve included more drivers than normal because, frankly, the win could come from any of them.

My Yahoo! Fantasy Picks
Group A
I’m in full save mode this week, and the nice thing about Daytona (and Talladega) is that my top picks frequently are not nine-start guys. I’m happy to activate Kyle Busch, and will likely go with Edwards as well.

Martin, Kurt Busch, Biffle and Stewart should also provide good value this week, and save you Johnson and Hamlin starts to boot.

Group B
Dale Jr. is a lock for me this week, and I’ll likely line up with Reutimann, Kenseth and McMurray as well. All four look good so far, and Reutimann and McMurray aren’t nine-start guys this year for me. Junior likely will be, but that’s partly because I must run him for value on the plate tracks. Kenseth will be close, but with eight starts remaining, I can afford to burn one.

Kahne and Logano are also strong choices this week.

Group C
I currently rate A.J. Allmendinger #1 in Group C, but there’s no way I’m burning one of my three remaining Allmendinger starts in this race. I like Regan Smith, Scott Speed, Paul Menard and Robby Gordon next, in that order (and close together).

I’m also intrigued by the 09 car this week, which will be piloted by Bobby Labonte. This car has Hendrick Motorsports ties (e.g., the engine), and Brad Keselowski won in it at Talladega last year (after chucking Edwards into the fence).

I’m not sure which way I’ll go yet, but I’m leaning toward Smith and Labonte. Apparently the wounds inflicted on my psyche by Max Papis at Sonoma are healing…

Stay tuned for my update following practice and qualifying.