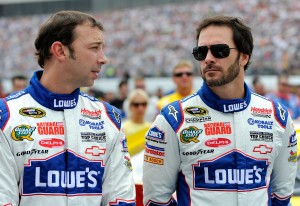 Jimmie Johnson and crew chief Chad Knaus shoot the bull prior to the race. (Photo Rusty Jarrett/Getty Images for NASCAR)

The New Hampshire race unfolded pretty much as expected, with one major exception.

Jimmie Johnson: My pre-race #1 pick took the checkered flag. He led early, but then lost track position in the pits. He slowly climbed back up throughout the race, then took the lead after a late caution. Another caution allowed Kurt Busch to bump him out of the way and take the lead, but Johnson reeled him back in and performed his own bump and run.

Jeff Gordon: My #2 pick had a good car, but not quite the top car. He brought it home fourth.

Juan Pablo Montoya: My 3# pick also seemed to have a good-but-not-great car, but the Colombian bull did too much beating and banging late, damaging his car in the process. He was eventually punted into the wall.

Kurt Busch: My #4 pick was there at the end and would’ve won if the race were just a few laps shorter. He finished third.

Kyle Busch: My #5 pick had a really good car, but Jeff Burton accidentally spun him late. He managed to finish 11th.

The Exception
I didn’t foresee Tony Stewart having a great day, but he moved forward throughout and was a factor at the end. He finished second. It appears it’s time to keep an eye on Stewart on the short-flat tracks.