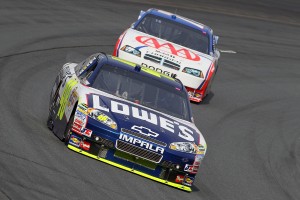 The NASCAR Sprint Cup teams got in all three practices and qualifying at New Hampshire this week, giving fantasy NASCAR players and those handicapping NASCAR solid data to analyze. Before I get into the updated rankings, though, let’s revisit this week’s predictability.

I rated New Hampshire’s predictability above average in my New Hampshire race preview, and two predictability factors have improved since then. First, the early week weather forecast for the New Hampshire Motor Speedway (NHMS) area called for a decent chance of scattered thunderstorms today. Today, however, Weather.com says there is almost no chance of rain this afternoon at NHMS. No rain means a consistent racing surface, and no threat of a rain stoppage. That bodes well for predictability.

Second, according to the Goodyear Tire Notes section on Jayski’s New Hampshire Race Info page, the teams are running the same tires as last year, and that improves predictability because the teams already know what to expect with the tires.

I think we can conclude today’s race predictability is now well above average. Fantasy NASCAR players should adjust by not saving driver starts unless the value offered by a big gun and a second- or third-tier driver is very similar. Bettors can adjust by making bets with slightly worse odds than normal.

Handicapping New Hampshire
I crunched the numbers from the three practice sessions and qualifying this week to obtain initial driver rankings for today’s race, and then I tweaked those results with the historical-data rankings I published in my New Hampshire preview. This process yielded a top five I feel good about, particularly the top dog: Jimmie Johnson. In my preview, I rated Johnson #1, and he did not disappoint in the preliminaries on Friday and Saturday. I think he’s the clear favorite today.

The #2–#5 drivers have shuffled a bit, with Denny Hamlin and Mark Martin falling out and Kurt and Kyle Busch moving up from the #6 and #7 spots, respectively. Here are my top five, with the best odds I could find online this morning:

I don’t like Johnson at 2.75-1 even with his clear-favorite status and the above average predictability in today’s race. I think Gordon is profitable at 10-1, and Montoya is, too, at 15-1. I don’t think the lines on the Busch brothers are profitable (though Kyle’s line is close).

My Yahoo! Fantasy Picks
Group A
I’ve got Hamlin and Johnson, and Hamlin doesn’t offer enough value to justify sitting Johnson. It appears I will have used up Johnson before the Chase, but that’s OK because I’ve gotten top value from him in each allocation, and there’s no guarantee he’ll continue providing top value later this year.

If you have Montoya, Gordon or the Busch brothers, you really can’t go wrong this week.

Group B
I have Clint Bowyer, Ryan Newman, Martin Truex Jr. and Kevin Harvick, and I rank them in that order. I’m thinking of running Truex instead of Bowyer to save one of my four remaining Bowyer starts. Boyer’s edge over Truex might be too great to merit the tactic, however. It’s a close call.

I rate Jeff Burton #3 in Group B now (just behind Newman), and Kasey Kahne #5.

Group C
I rated Sam Hornish Jr. and A.J. Allmendinger #1 and #2 in Group C prior to the preliminaries, and their performances on Friday and Saturday cemented those rankings. I have both, and I’m stoked to have a chance to run Hornish for value and save Allmendinger.

After those two, I like Scott Speed and Paul Menard, in that order.