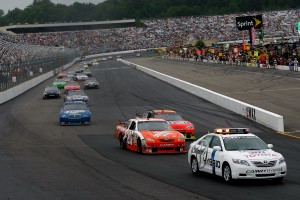 The NASCAR Sprint Cup series rolls on to Loudon, N.H., this week for a run a New Hampshire Motor Speedway (NHMS). NHMS is an oval measuring roughly 1 mile in length with little banking in the turns. These specs place NHMS squarely in the short-flat track category, which includes Martinsville, Phoenix and Richmond. Fantasy NASCAR players and those handicapping NASCAR therefore have a healthy amount of historical data to review this week, and lots of data generally improves race predictability.

In addition, NHMS is bigger than the congested, bumper-car tracks at Martinsville and Bristol, and smaller than the massive flat tracks (e.g., Michigan, Pocono, etc.) that tend to promote fuel-mileage tactics. Add in the good weather forecast for the rest of the week—Weather.com calls for clear skies Friday and Saturday, with a chance of scattered thunderstorms on Sunday—and I think race predictability is above average this week.

Handicapping New Hampshire
I pulled together and crunched the practice, qualifying and race data for all the races run on short-flat tracks in 2009 and 2010. Then I did the same for just the recent short-flat races, and then just the 2009 New Hampshire races. I compiled the results of those three analysis to produce preliminary driver rankings.

Finally, after re-reading some of my notes and articles from earlier this year and articles and posts by other online experts, I tweaked those rankings with my impressions of who is trending up and down on the short-flats.

I think Johnson is the clear favorite so far this week, and Gordon, Hamlin and Montoya are bunched tightly together. I’m uncomfortable ranking Martin so high because he seems to have become an afterthought this season, but his numbers look good—we’ll see… 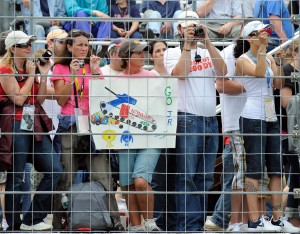 A Dale Jr. fan displays a sign at NHMS last year. It appears a #88 tank is crushing Kyle Busch's 18 car, and M&Ms are crying. (Photo Rusty Jarrett/Getty Images for NASCAR)

My Yahoo! Fantasy Picks
Group A
Given the above-average predictability at NHMS, I have no problem activating Johnson. I’m not quite sure which way I’ll go between Gordon, Hamlin and Montoya, however.

Group B
I’ll activate Newman, Truex, Bowyer and Kevin Harvick in Group B. I think David Reutimann makes a good dark horse, and Jeff Burton and Joey Logano should be right there, too.

Group C
Once again, A.J. Allmendinger and Sam Hornish Jr. look to be the cream of Group C this week, with Scott Speed a somewhat distant third.

I rate Robby Gordon #4, but he will apparently skip the race this week. I also rate Bobby Labonte pretty high, but get this: He’s out of the 71 car this week (and Andy Lally is in), but he might step into Robby Gordon’s 7 car. If you’re in a gambling mood, take a look at that situation, but make sure you have a backup plan (i.e., Allmendinger or Hornish).