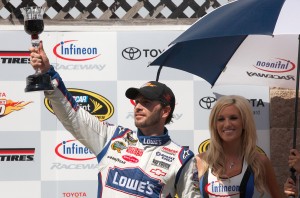 Jimmie Johnson celebrates his win with one of the Infineon girls. (Photo Chris Graythen/Getty Images for NASCAR)

Despite lots of on-track carnage and pit-road tactics, yesterday’s race on the road course at Sonoma, Calif., unfolded pretty much as expected, with one glaring exception.

Marcos Ambrose: In my race preview update, I tabbed the Aussie the favorite to win, and he was well on his way to victory when he committed a colossal error under caution with less than 10 laps remaining. He shut down his engine to preserve fuel, and when he had trouble refiring it, he slipped from first back to seventh.

Jimmie Johnson: My #2 pick was well on his way to finish second, and then Ambrose handed him the win.

Denny Hamlin: Shortly before the race began, the telecast announcers noted how the 11 team had spent very little time (i.e., two hours) and energy prepping for the 2010 road course races and would consider a top 10 a nice achievement. Had I know that info, I wouldn’t have rated Hamlin nearly so high in my update. It appeared he was indeed considerably slower than the leaders in the early going, and then his day turned into a bumper-car festival, dooming any chance he had of finishing well.

Kevin Harvick: Harvick kept his nose clean throughout the race, and as the laps wound down, he was within striking distance of the leaders. He finished third. 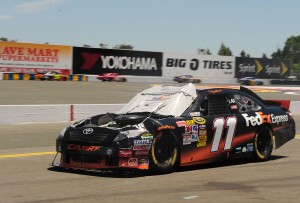 On to New Hampshire!