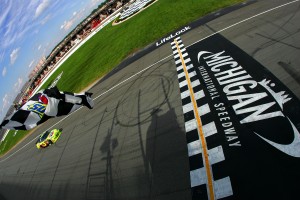 The NASCAR Sprint Cup series heads to Michigan International Speedway (MIS) in Brooklyn, Mich., this week, and fantasy NASCAR players and those handicapping NASCAR should enjoy decent predictability with this race. Let’s go through the key predicatibility factors:

The Historical Data
MIS is a big, flat, D-shaped track, so for data-analysis purposes, we can group it loosely with Pocono, Indianapolis and Kansas. However, it’s also essentially identical to the track in Fontana, Calif., which means we have superb historical data from four 2009 races (i.e., two at Michigan, and two at California) and this year’s race at California. Plus, we have the data from last week’s race at Pocono to crunch, so I think we can safely discard the data from last year’s races at Pocono, Indy and Kansas because our data sample size will remain strong without them. Tossing typically usable data is rare, and it leads to one conclusion—predictability is pretty good this week.

The Weather
Of course, Mother Nature might take her swings at us this week. As of Wednesday, Weather.com is calling for scattered thunderstorms on Friday, Saturday, and Sunday, and that reduces predictability a bit because rain would alter the racing surface, could wipe out practices and/or qualifying, and could even cause a rain stoppage on Sunday, giving us a wild-card winner.

Fuel Mileage
Wrecks are not much of a concern on the wide-open prairies of MIS, but that can actually lead to another predictability factor: fuel mileage. MIS races typically feature long green-flag runs, which can bring fuel-mileage, and various pit-road tactics to take advantage of fuel mileage, into play. We saw the fuel-mileage factor coming into play at Pocono last week, and it likely would’ve dramatically shaken up the finishing order if not for a series of caution flags at the end.

Handicapping Michigan
I crunched the practice, qualifying and race data from the 2009 California and Michigan races, the 2010 California race, and last week’s Pocono race. I compiled the results of those three analysis to product initial driver rankings, and I tweaked those rankings with my impressions of who is trending up on these big-flats, and who is trending down.

Here are my preliminary top 12:

At this point in the week, Jimmie Johnson is the clear favorite to win on Sunday. He’s clearly the man at California, very good at Michigan in 2009 (don’t let his poor finishes there in 2009 deceive you), and very good last week at Pocono.

My Yahoo! Fantasy Picks
Group A
Johnson has such an edge this week I’m compelled to activate him, and if he runs as well in the preliminaries as expected, I’ll likely start him. That’s OK, though. When a nine-start driver has a big edge, you simply must run him and take that value immediately. There’s no guarantee he’ll have as big an edge at later races. If his edge is small, you can consider saving him for later. 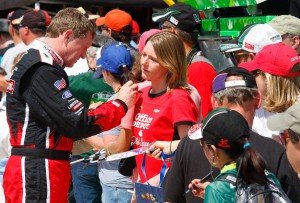 I will also likely activate Kurt Busch. Not only do I currently rate him #2 in Group A, I have a full nine starts remaining with him—double bingo.

Group B
I love Bowyer this week, so I’m compelled to activate him yet again. I think his compatriots at Richard Childress Racing—Harvick and Burton—also look great in Group B, but I’m not sure yet if I’ll activate both. All three RCR cars are likely nine-start guys, so I need to save them when I can to ensure I get top value on all 18 non road-course and plate tracks remaining on the schedule.

Fortunately, Kahne, McMurray, and Logano are right there this week as well, give us a lot of solid options.

Group C
Sam Hornish Jr. looks tops in Group C this week. After Hornish, I rate A.J. Allmendinger and Scott Speed about even. I’m tempted to activate Speed alongside Hornish, but I don’t know if my nerves could handle not having Allmendinger as a safety blanket.

I like Paul Menard next, and then Regan Smith.