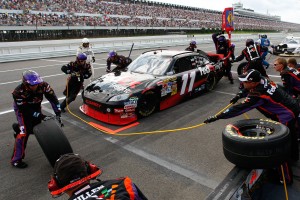 The 11 nailed down another victory on Sunday at Pocono. (Photo Geoff Burke/Getty Images for NASCAR)

After an initial rain delay, the Pocono race got underway and went the distance with no further interference from the sky. Various shenanigans at the end—i.e., pit-road tactics, multiple double-file restarts, and a big crash—shook up the finishing order a bit, but on the whole there were few surprises yesterday.

Jimmie Johnson: Johnson had a very strong car but was compromised by a terrible starting position. He climbed through the field throughout the race but never quite got to the front. He finished fifth.

Denny Hamlin: As expected, Hamlin also had a terrific car, and he took the trophy.

Juan Pablo Montoya: The 42 was fast, but not quite as fast as expected. He had a chance to take the lead in the closing laps (thanks primarily to pit tactics), but he couldn’t get there. He slipped back to eighth for the finish.

Clint Bowyer: Bowyer was the class of the field in the first half, but he lost the lead on pit road, and he wasn’t quite as good after that stop. He then slapped the wall and seemed to get a little slower. He managed to bring ‘er home ninth, however.

Kyle Busch: The 18 was terrific, but not quite as fast as Hamlin. He nabbed second place.

Off to Michigan, another big-flat track. Stay tuned for my race preview.