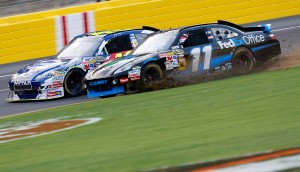 The 48 comes down into the 11, damaging both cars. (Photo Geoff Burke/Getty Images for NASCAR)

I was hot and cold with my Charlotte picks last week:

The big surprise: Jamie McMurray. I did not foresee the 1 running so well. His car was faster than Busch’s on long runs, and he likely would’ve won if he’d had a few more laps to work with.