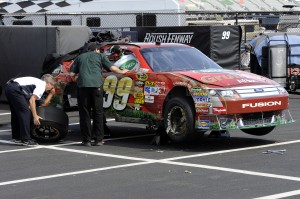 The preliminaries are over in Charlotte, and the action helped clarify who will likely run up front in tonight’s NASCAR Sprint Cup race.  Significant fog remains, however, because the data provided by practice and qualifying has limited value.

Particularly the practice session and qualifying run on Thursday. Why? In a word, heat. The race will begin in the evening tonight, and the black asphalt track will be pretty hot after baking in the North Carolina sun all day. When the sun goes down, the track will begin to cool, and when this speedway undergoes temperature changes, it really affects race-car performance.

Thursday’s practice was held in the heat of the day, and the track conditions then bore little resemblance to the track the drivers will face during tonight’s 600 miler. In a pit-road interview during the practice broadcast on Speed, Jimmie Johnson said the 48 team was practicing on the hot, slick track only because if they didn’t, “we’d just be sitting around in the garage.” He went on to say he and crew chief Chad Knaus were resisting the urge to make many setup changes to get faster on the hot track. The point: If the 48 team doesn’t think Practice 1 had much value, that doesn’t say much for its predictive value to those of us handicapping the race.

Qualifying wasn’t much better because it was held in the evening as the track cooled. As the track cooled, it offered more and more grip, so the cars that qualified early were at a severe disadvantage to those that qualified late. If we had a mathematical formula that could adjust the qualifying times of the early cars to compensate for the slower track, we could get a pretty good handle on which cars have the most speed. I don’t have any such formula, of course.

Yesterday was better, fortunately. The weather forecast called for scattered thunderstorms, but the teams got in both practice sessions, and that gives us a feel for who is good in long-run race trim. Just keep in mind these practices were also held on a hot track.

One last concern: The forecast on Weather.com this morning calls for scattered thunderstorms this evening, and that decreases race predicabilty a bit more. Rain could wash the rubber out of the track, cool the track down, and/or give us a wild-card winner if we get a rain stoppage.

On the flip side, Kyle Busch and Jeff Gordon seem to be a little off, and Dale Earnhardt Jr. hasn’t shown much at all this week. I thought Martin Truex Jr. might make a good dark horse, and his fast work Thursday and Saturday elevated him from dark horse to favorite, in my opinion.

So, here are my updated rankings, with the best odds I could find this morning at various online sportsbooks:

I don’t think betting Johnson at 3-1 offers any value. Kurt Busch and Denny Hamlin are profitable at 9-1 and 8-1, respectively. I like Kasey Kahne at 15-1, and the lines on Bowyer and Truex (28-1 and 25-1, respectively) frankly seem way out of line. For bettors, in a good way.

My Yahoo! Fantasy Picks
Group A
I’ve got Kyle Busch and Jeff Gordon, and I’ll probably go with Busch, although I think it’s close. If I had Johnson, I’d start him and not worry about saving a start because he’s got a substantial edge tonight.

Group B
I’m psyched to have Kahne, and bummed I seem to have missed so badly on Dale Jr. I’ve also got Bowyer and Jeff Burton, and although I think Bowyer has a slight edge on Burton, I’ll likely start Burton because I have lots of Burton starts left and few Bowyer starts.

As noted above, Truex looks quite good. I also think his teammate, David Reutimann, will run well today.

Group C
I’ve got A.J. Allmendinger and Paul Menard, and I think Menard has a small edge in this matchup, so he gets the nod, allowing me to save an Allmendinger start.

Casey Mears looks pretty good, too, and Sam Hornish Jr. and Scott Speed should provide decent returns in Group C tonight as well. And Regan Smith thrust himself into the Group C picture this week—if you’re in the mood to gamble, think about the 78.