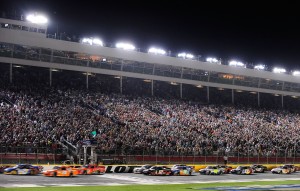 Kurt Busch leads the field to the green flag in the All Star race. (Photo Rusty Jarrett/Getty Images for NASCAR)

The Sprint Cup series remains at Charlotte Motor Speedway (CMS) following the exciting All Star race last weekend, gearing up for the long, arduous Coca Cola 600. I think this race offers those of us handicapping NASCAR a fair amount of predictability despite a couple limiting factors.

The Data
CMS is another 1.5-mile, steep-banked, D-shaped track, very similar to the other banked cookie-cutter tracks on the circuit, including Texas, Atlanta, Las Vegas and Homestead. We therefore have a good amount of historical practice, qualifying and race data to analyze for this race, including pretty current data from this year’s races at Texas, Atlanta, and Las Vegas, as well as the All Star race data.

There are some caveats, however. First, the Texas data is the most recent, but it’s limited due to the rain that fell during the preliminaries and a late-race crash that skewed the numbers of several top performers. Second, the All Star data offers limited value because the cars were tuned for short-run racing, and the Coke 600 favors cars tuned for the long haul.

The Weather
At press time, it appears Mother Nature will mess with us again a bit this weekend. The teams should receive warm, clear skies for Thursday’s practice and qualifying, but rain will likely affect some of the practice time scheduled for Saturday, thereby limited that data. Race day should revert to warm-clear conditions.

Handicapping Charlotte
I’ve analyzed all the historical data from the banked cookie cutters, and I used the teams’ All Star weekend performances to fine-tune my rankings. Jimmie Johnson and Kyle Busch top my charts. We didn’t get to see what Jeff Gordon’s car was like in the All Star race due to his first-lap crash, but I rate him very high, too.

I’m also feeling good about Kurt Busch’s chances. Prior to the All Star race, I would’ve ranked him in my top 10 (probably #7), and I think his run in the final segment of the All Star race should move him up. Not necessarily because he won the race, though. It was the way he drove away from Jimmie Johnson, who had had the dominant car to that point. It may have been just a short-run fluke, but he bears watching this week.

OK, here are my preliminary rankings:

My Yahoo! Fantasy Picks
Group A
I will likely bench Jimmie Johnson and line up with Kyle Busch and Gordon because I think those two offer comparable value to Johnson, allowing me to save a Johnson start. I also think Kurt Busch, Greg Biffle and Denny Hamlin offer good value this weekend.

Between those six drivers, you really can’t make bad picks in Group A—you’ll get good value regardless.

Group B
Clint Bowyer, Dale Jr. and Kasey Kahne top my Group B chart (in that order), so they make my roster.

That leaves the four hole. I also like Ryan Newman, Jeff Burton, Martin Truex Jr., Joey Logano and David Reutimann, in that order. I have only four Newman starts remaining and eight Burton starts, so I’m leaning toward running Burton because I don’t think there’s a big difference between the two this week.

I might tab Truex instead. He looked pretty good at the All Star race, and in an interview this week with the Charlotte Observer, he said his car was good on long runs.

Logano makes an interesting dark horse this week, primarily because his Gibbs Racing teammates (Kyle Busch and Hamlin) are so fast. Reutimann is a little more iffy, but if Truex is fast, it seems safe to speculate some of that will rub off on teammate Reutimann as the teams share notes, etc.

Group C
A.J. Allmendinger, Sam Hornish Jr. and Paul Menard top Group C this week by a sizeable margin. I will activate Menard (he looked really good at Texas), and probably Allmendinger as well. Hornish looked great in the Texas preliminaries, but in the race his setup was off and, predictably, he eventually spun.

Casey Mears will probably run well at Charlotte (at least by Group C standards), but I’m inclined to hold off on running him until 1) he and his team get more comfortable working together, and 2) we get more data on him in the 83 car. He should offer good Group C value later this year, so no rush to use him now.

Don’t Forget
The Yahoo! roster deadline comes early this week—tomorrow at 2:00 am Eastern—so make sure you set your rosters today.