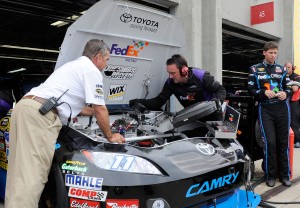 Tonight NASCAR puts on its grand show, the All Star Race. I think this event is a lot of fun, but from a handicapping perspective, it’s a challenge due to the funky race format (i.e., the four-segment thing, which I’ll get to below). Plus, two other predictive factors, the weather and tires, aren’t on our side this weekend either.

The Weather
At press time, Weather.com says there’s a 45% chance of scattered thunderstorms this afternoon and tonight in the Charlotte, N.C., area, and that decreases predictability. First, it increases the chance we’ll have a rain-shortened race tonight, which could give us a wild card winner. Second, rain could wash the rubber out of the track, forcing the teams to chase changing track conditions with their setups.

Tires
According to the Goodyear Tire Notes section on Jayski’s All Star Race info page, the teams are running a new left-side tire this weekend. That decreases predictability a bit as well.

The Data
At first glance, it appears we have lots of good historical data for tonight’s race because Charlotte Motor Speedway is a banked cookie-cutter track quite similar to the tracks at Las Vegas, Atlanta and Texas, and we have lots of data from those tracks already this year. This is true to a degree, but I think the historical data’s value is pretty limited because the All Star race is not a typical 500-mile affair, but a 100-lap race broken into four segments of 50, 20, 20, and 10 laps. This requires teams to set the cars up for shorter runs than they do for a regular-season race, and that limits the value of applying the Vegas, Atlanta and Texas data to the All Star race.

In addition, the teams got in one practice yesterday, but rain wiped out qualifying, further limiting our All Star race data.

The Segment Thing
The four-segment format for tonight’s race certainly produces exciting action. (For a good explanation of the format, check out the “All Star format” section of Jayski’s All Star Race info page.) I think it reduces predictability, though, because it forces restarts, including one with 10 laps to go, and we’ve seen several times this year how the double-file restart tends to shake things up. It also injects the teams’ pit crews into the equation just before that final segment.

Handicapping the All Star Race
All that said, we can still get a feel for who will run well tonight by looking at the historical data and yesterday’s practice. Prior to practice, I liked Jeff Gordon, Jimmie Johnson, Tony Stewart, and Kyle Busch for this race, in that order, but the practice shook things up. In short, Jimmie Johnson looked lights-out fast in practice and jumped to the top of my chart. Gordon and Busch also looked good, but Tony Stewart not so much.

Here are my top three, with the best odds I could find this morning. I’m limiting it to three because after these three guys, it’s a real jumble, and because of all the unpredictability inherent in this race:

I think there’s just too much unpredictability in the All Star race to make betting Johnson profitable at 4.5-1 (I’d feel better at 6-1). Gordon is probably close at 7-1.

That’s it for this week. If you’re doing some NASCAR betting on tonight’s tilt, good luck!

1 thought on “Race Preview: The All Star Race”